This post could/should probably fall under Tuesdays With Tux, but since it involves a recurring theme here on Chasing Roots - critters - I decided it deserved a Monday slot.

Two weeks ago Sunday the critters joined forces and staged an attack against me. First, I found yet another lizard in my washing machine. (Seriously. SERIOUSLY. Does this happen to anyone else? It's happened to me THREE times now.) Second, a frog/toad repeatedly hopped in front of me as I circled the track on my walk. And third, a live lizard somehow made it from the backyard into the house. He was probably on his way to my washing machine...

As per usual, I trapped the live lizard under a Tupperware container. I expected Tom home in a couple of hours, so rather than continue with evacuation procedures, I decided to let the lizard just hang out in the living room. (Under the Tupperware container, of course.) Being able to see but not play with his lizard friend sent Tux into a panic, and he started frantically pushing the container across the wood floor with his head. I couldn't risk Tux actually setting the lizard free, so I set a large basket full of books on top of the container…turns out six-pounds-soaking-wet Tux is stronger than he looks - he had no trouble continuing to move the container with six or seven books weighing it down.
Will and I donned on our problem solver hats and decided to cover the container with a towel, assuming the theory of "out of sight, out of mind" would apply to cats. Turns out Tux is also smarter than he looks - he stood guard for a while and eventually just curled up next to the covered container. He remained on lookout duty for two hours - getting up only to grab a quick bite to eat - until Tom finally took the traumatized lizard back outside. 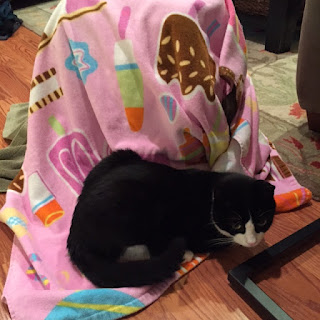