1. Last Thursday night Will performed in his first school musical. The production was called "Food, Glorious Food" and included six songs about preparing to eat and then enjoying various kinds of delicious foods. All of the second graders participated in the entire show by singing from the risers, but each student had the opportunity to also dance (while singing, if they could do both) on stage during one of the songs. Will chose the song "Apples" as his showcase number and did a lovely job, if I do say so myself.

I helped the music and second grade teachers before and during the production with costumes and props so I was backstage as the kids headed out for their opening number. I made the mistake of telling a few of them to "break a leg"; they looked at me like I'd just threatened to run them over with my car. I guess second graders aren't quite ready for theater vernacular...

2. Earlier this week our city kicked off a single-stream recycling pilot test in one particular neighborhood. (For those of you who aren't familiar with this kind of recycling, single-stream allows citizens to place all recyclables in one, large, garbage can-esque container that can be rolled out to the street on recycling day.) Single-stream recycling made its way to the Midwestern communities in which we lived years ago, so having to once again sort and bag our recycling (into five different categories) when we moved to College Station was annoying and time consuming.

The idea and hope is that implementing the single-stream system will result in more recyclers and more recyclables collected; I honestly don't understand how this system couldn't succeed - with single-stream recycling it's as easy to toss a tin can, plastic tub, or cardboard box into the recycling bin as it is to toss the same item into the trash can. WE NEED THIS in College Station, and this pilot test is the first step to making it happen.

3. Last weekend the kids and I saw McFarland, USA. As we walked through the parking lot toward the theater, I reminded the kids about movie etiquette: go to the bathroom beforehand, whisper if you need to ask me questions, sit politely in your seat, etc. When I finished my spiel, Will added, "and no crying". I acknowledged his contribution, but added that while at the movie theater both he and Hallie should avoid any kind of behavior that could potentially lead to crying. Will shook his head. "No, Mama. Not us. YOU."

My boy understands my relationship with underdog-driven, sports-themed movies far too well.

When my tears started falling (because let's be honest - we all knew they would. Heck, I'm crying just thinking about the movie now), Will didn't roll his eyes or laugh at me. Instead, he took my hand.

4. I feel fairly certain we saved the lives of a few ducks last weekend, simply by showing up the park and feeding them our leftover hamburger buns. We could tell by how quickly the ducks devoured six stale, whole wheat buns and viciously attacked one another to get to each piece that landed in the water that they hadn't seen people or food in quite some time. I guess it falls on us Midwesterners to keep the ducks fed during these unseasonably cold Texas winters. (We didn't see a single person outside while walking to and from or while playing at the park.) 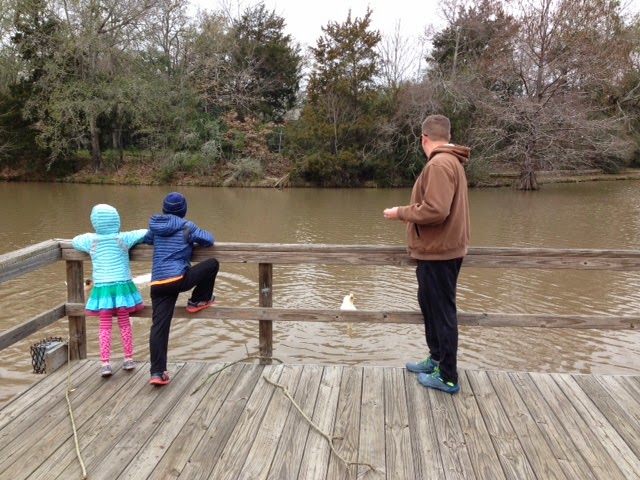 5. Happiness Highlights:
Last but not least… Will and Hallie have been working SO hard on Heart and Soul together without a grown-up. (Will can play both parts, and Hallie can play the top part, but both do better when playing with an adult who can "adapt" their half of the duet - by slowing down/speeding up - when necessary.) I wouldn't say they "nailed it", but they've finally gotten to the point where a bystander can tell what song they're playing. It's refreshing to see - and hear - them actually work together toward a common goal!