I'll be the first to admit that I sounded an awful lot like Debbie Downer last week. Even my High Five for Friday post - which should have focused on only the positive aspects of my week - followed a "two steps forward, one step back" theme. My apologies.

With the arrival of March comes my/our first busy stretch of the new year. Tom starts working longer hours; the kids' athletic practices and games, extracurricular activities, and school events increase in number and commitment level; showers and parties decorate every weekend; and family members who have finally grown tired of the ice and snow up north start visiting us. Mid-March through the end of the school year, approached with last week's attitude, could be overwhelming and exhausting. This same time period approached with a positive attitude, however, is one of my favorite "seasons" of the year.

Today is a new day. A new week. A new month. (A month that hosts the first day of spring, no less!) And after the last 10 days, I'm ready to start this Monday, this week, the month of March, and this crazy season off on the right foot: healthy, organized, and with an enthusiastically positive attitude.

To get me going this morning I checked in on all of the good news, interesting stories, inspirational quotes, and funny pictures I've bookmarked throughout the last two less-than-stellar weeks. I hope some of them give you, as they gave me, a pick-me-up to start this season - even if for you "season" just means the next hour - off on the right foot.

More often than not I'm first in line at the theater when movie studios remake traditional fairy tales but approach the story from a different perspective (or throws in a twist). These two upcoming films are no exception - anyone want to see Pan and/or Beauty and the Beast with me?

I love Journey and their hit, Don't Stop Believing. This one made me laugh, but I'm not sure if I laughed at the joke or at those cute little people in the picture who look like they're conspiring against the band.

Did you know that research suggests that expressive writing can improve mood disorders, improve overall health during cancer treatment and after heart attacks, reduce doctor visits, boost memory, and…improve happiness by "changing our perceptions of ourselves and identifying obstacles that stand in the way of better health". I guess I should keep at it!

Check out these less often seen views of 13 historical landmarks. They are no less beautiful than the traditional photos of these man-made masterpieces, but they certainly alter our perspective.

Disney announced that it will release a sequel to Frozen at some point in the near future. They apparently don't know that a sequel - titled Frozen Tundra and about, well, I'll let you football fans guess what the sequel is about - has already been released.

I obsess a little bit about a lot of things, one of which happens to be lighthouses. If I had the money and the time, I'd make the trek to each and every one of these beautiful, majestic beacons of light.

My lovely Grandma Hallie suffered from Alzheimer's Disease before she passed away years ago, and as a result I fear this illness more than almost any other. News of progress toward treatment and/or a cure always lifts my spirits. 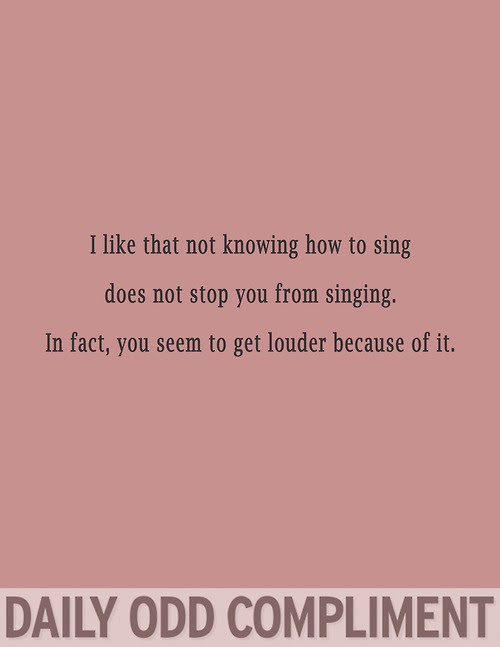 Also for Grandma Hallie, who - bless her heart - couldn't carry a tune in a bucket, this Daily Odd Compliment.

If you love the written word, these beautifully created and subtlely powerful sentences can't be missed.

And last but not least, my go-to Des Hommes et des Chatons.