1. Remember this video of a lovely husband and wife lip-syncing Frozen's "Love is an Open Door" while cruising along in their car? Well two (with a third acting as something of a sidekick) members of the Navy baseball team spoofed that couple's video, and their version might be even better than the "original".

I just watched the video again and I can't get over the facial expressions of the fellow on the left. Check it out - I promise it'll make you happy!

2. Despite the fact that I really want to love running, I just don't. On occasion I jog for a few minutes while waiting for a group fitness class to start, and I run around at the playground and on athletic fields with my kids, but I find running long distances just to, well, run long distances, to be the most painful and boring exercise around. (Again, I don't want to feel this way. Please don't hurt - or chase - me, runners.)

I do, however, love watching other people run competitively. I couldn't find live coverage of the Boston Marathon anywhere on television yesterday morning (honestly, ESPN. Showing NBA highlights rather than covering of one of the most storied and - because of the events of last year - triumphant sporting events in our country's history? Not your best move), so as soon as I knew runners had begun crossing the finish line, I starting searching online for updates on this incredible sporting event.

I came across so many heart-warming and uplifting stories and photos and tributes that I wanted to share, but because doing so would mean going on for pages and ages, I decided to share just this photo compilation. These photos almost motivated me to skip the gym and head outside for a run instead...

3. My dad, on his way home from a business trip to Mexico, is making a stop in College Station this weekend. Will can't wait for Grandpa to attend his Tae Kwon Do graduation (camo belt to green belt) tonight, Hallie is ready to show him all her princesses and ponies and "beat him at Uno because he probably doesn't know how to play", and Tom is looking forward to taking him disc golfing on Saturday. If I actually get any time with Grandpa myself, I hope to convince him to help me plant tomatoes, peppers, and maybe a few flowers in our backyard garden bed; after all, behind Grandpa-ing, accounting, rock-and-rolling, and water skiing, gardening is where he shines. 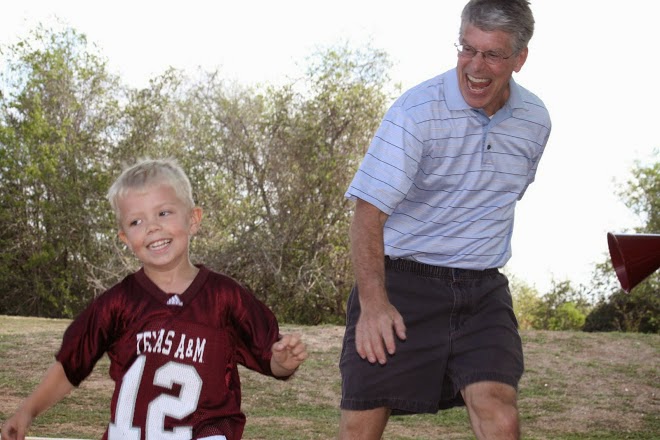 4. Four months after having laser eye surgery, and for probably the first time in my entire life, my vision is 20/20.

I started wearing glasses in the third grade and contacts a few years later. By the time I graduated from middle school, my eyes had grown so bad that I could not function AT ALL without corrective lenses. On the morning of my surgery, both eyes were nearly 20/750, but 24 hours later they were 20/30 and a month later they were 20/25.