We're far from regulars at Aggie sporting events, but we do our best make it to at least a couple of games - women's soccer, men's and women's basketball, men's baseball - each season. This fall kind of got away from us, and it wasn't until the Aggie women's soccer team qualified for the NCAA tournament that I realized we hadn't cheered on a single Aggie team since the end of the spring baseball season.

When we arrived at the game, we discovered that the gate to the neighboring track had been left open. I took that circumstance as a sign my children needed to run a little before I asked them to sit for 120 minutes in the stands, and I sent them on their way. 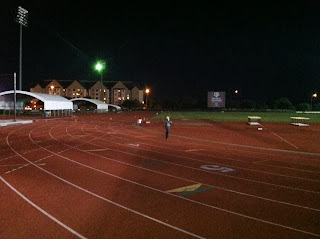 After a 1/4 mile jog for Hallie and a 1/2 mile run for Will, we found our seats. Notice that both kids are wearing long-sleeved shirts, and that the girl leaning up against the fence is wearing a short-sleeved shirt. 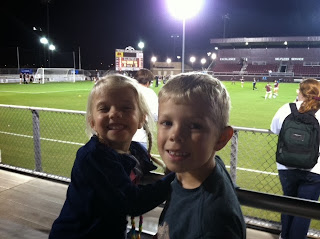 20 minutes later, my Texas baby looked like this. Toughen up, Hal Gal. 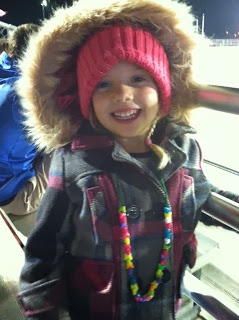 Midway through the game, President Loftin arrived and walked through the stands shaking hands and taking pictures with students. When he passed our family, he said hello to Tom, shook Will's hand and smiled at Hallie. She responded - unprompted - with a huge, crowd-pleasing grin and a hearty "gig 'em!", complete with the associated thumbs up. She really is a Texan now…

With about 15 minutes left in the second half, Hallie fell asleep on the bench. Hallie has never fallen asleep anywhere but her bed, so Tom and I honestly had no idea what to do with her. We let her sleep for the rest of the half, but when the game went to overtime, Tom took Hallie home and Will and I stayed to cheer for the Aggies. 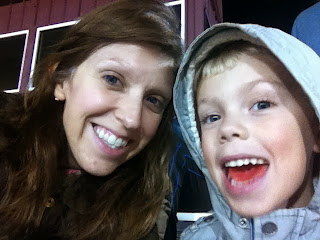 Will and I went wild when, just a minute or two into overtime, the Aggies scored and won the game, moving on to the second round of the NCAA tournament. 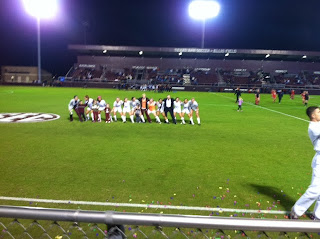 I felt badly that Tom missed the most exciting moment of the game (prior to the overtime goal, the score had been 0-0), but he assured me that the opportunity to carry a sleeping Hallie to the car and then into the house and to her bed was a wonderful "dad moment".

Unfortunately the next/second game in the NCAA tournament was the end of the road for the Aggies, but they played a great season (18-5-2 overall, 9-2 in the SEC and winner of the SEC tournament). We promise to be better fans in 2014, Aggies!
Posted by Chasing Roots at 6:00 AM