1. For me, what happens on Monday morning often sets the tone for the remainder of the week. Wake up late? Car won't start? Grab the reigns…the week will be a wild one. But wake up before the alarm goes off? Kids dress and eat and leave for school ahead of schedule? The week will be one to high-five about.

My Monday morning began with a hilarious incident - a friend of mine taught the entire first song of our (rather large) Group Power fitness class with a panty liner wrapped around her shoe - and then stayed the course toward happiness and humor and "I can't believe that just happened but since it did I'll just laugh about it"-ness.

And since it seems my Monday morning mood/attitude follows me throughout the next five days, I'm going to request that the folks at my gym keep up the antics in that first Group Power class of the week…toilet paper on the shoe, pants on backwards, completely backwards choreography, you get the picture. Speaking of, I really wish I'd taken a picture of Mary's* shoe to show you. Maybe next week!

* Names have been changed to protect the embarrassed.

2. My Christmas card photo has been taken and edited, my Christmas cards have been ordered and delivered, and by the end of the weekend my Christmas letter will be finished. If I play my (figurative, not Christmas) cards right, I'll have these babies in the mail before Thanksgiving!

3. Will takes his football to school every day so that he can play "two-hand-touch" with his friends at recess. He often carries the ball - instead of putting it in his backpack - when he leaves for the day, and he loves to chuck it at me as soon as he walks out the school door and sees me waiting for him. Sometimes I catch it, sometimes it hits me in the gut, and always I remind him that we can't play football while surrounded by tons of parents and little kids waiting for their elementary school students to emerge from the building.

On Wednesday the public schools released students early (as they do once every six weeks), which meant I picked Will up before and without Hallie. As Will and I walked home together, we played football the entire way. He ran ahead of me, and I threw him the ball over and over again - first down, second down, etc. - until he caught it and ran to the next mailbox to score a touchdown and earn a new set of downs. It was the most fun I've had playing with my boy in ages, and I can't wait to do it again, hopefully sooner than six weeks from now. 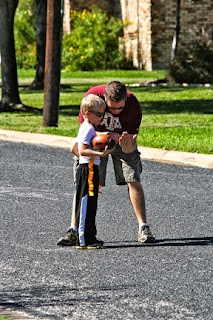 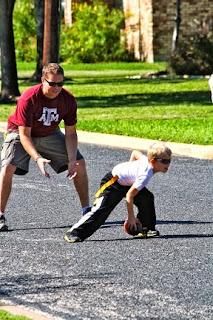 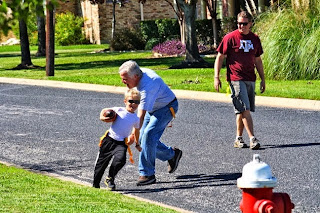 4. Thanks to the wonders of the internet, online mapmakers are helping Red Cross volunteers respond more quickly and efficiently to the devastation caused to the Philippines by Super Typhoon Haiyan. According to the article, between November 9th and 11th (the three days leading up to publication), approximately 400 volunteers made nearly 750,000 additions to a free, online map of the areas affected by the typhoon in what the author calls a worldwide crowd-sourced humanitarian effort. Though this is not the first time the Open Street Map has made an impact on relief and recovery efforts during humanitarian crises, this is the first time the Red Cross has been able to use the tool to better coordinate volunteers and provide assistance. This is a fascinating story - check it out here!

5. Parents, you must watch this video. I promise you won't regret it. So funny, and SO, SO true.


Linking up with High Five for Friday!
Posted by Chasing Roots at 6:00 AM