Today I'd like to share just a few of the photos and stories - beyond those belonging to Sara, Jeff, Lily, and Carter - that have come out of Washington, Illinois throughout the last seven days.

Your heart will swell when you read about this man, who found his beloved family dog - previously presumed dead - buried alive beneath the rubble. 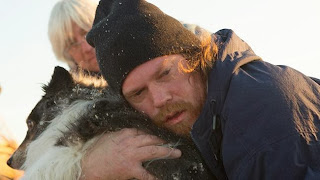 And here's a second heart-warming story about a man who found his fiancé's engagement ring buried in the wreckage of their home and then re-proposed to her surrounded by the family members and friends who had been helping them search for their belongings. 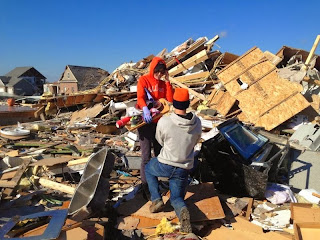 On Sunday morning The Today Show ran a touching piece about the Washington High School Panther football team…a team that turned what was expected to be a rebuilding year into a season of victories and earned its first trip to the Illinois State Tournament in 28 years. The tornado struck just days before the Panthers' semi-final game, and as soon as the dust had settled, coaches and players stepped away from football to focus on supporting their community (including Sara and Jeff), even though eight of the team's players lost their own homes. On Saturday, the community said thank you by showing their support for this team of first-class young men. 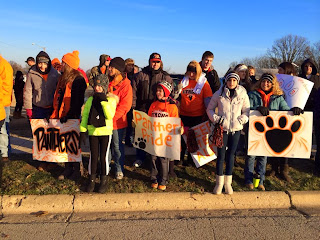 Operation BBQ Relief began in the wake of the May 2011 tornadoes in Joplin, MO and has grown into a national nonprofit organization that "provides compassion and offers hope and friendship to those whose lives have been affected by natural disasters…through our expertise in cooking and catering barbecue meals and our ability to quickly mobilize our teams into any area where nature disrupts and tears apart the lives of Americans". So far Operation BBQ Relief has served nearly 4,000 well-balanced, delicious, and hot meals to the people of Washington, Illinois.

Those whose homes lay in the path of the tornado lost nearly everything, but now, thanks to social media and the "six degrees of Facebook friends" phenomenon, some of what was lost is finding its way back home. The map below shows how far documents like checks, bank statements, marriage licenses, birth certificates, and even photos traveled on the winds of the tornado before they landed in the hands of strangers. Strangers who then took the time to track down the rightful owners, and return these small but significant pieces of lives lived. 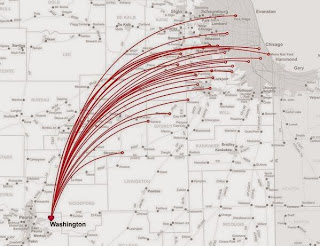 The Chicago Cubs organization collected non-perishable food items and supplies on Thursday and Friday, and then delivered the donations to Peoria, Illinois for local distribution on Friday evening.

The Chicago Bears on Saturday and Sunday wore Washington Panther (the local high school football team) tee-shirts during their pre-game and post-game press conferences. I'm from Wisconsin and bleed Packer green and gold, so although I spend most Sundays rooting against the Bears, just this once I allowed myself to celebrate their organization. (The St. Louis Rams also deserve a shout-out, as they donated one of their full-service, 16-person suites to the Bears so that the Bears could auction it off as a fundraiser for the American Red Cross.) 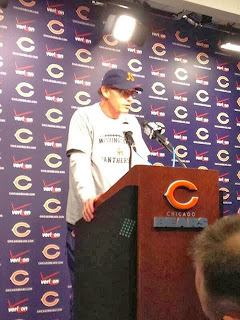 Speaking of the Red Cross...As many of you know, I am and always will be a Red Crosser. I may no longer work in a Red Cross office, but I volunteer for my local chapter, write for the National American Red Cross blog, and stay connected with the two chapters for which I once worked. I want to take a moment to highlight and thank this incredible organization for the work they've done - and the work they will continue to do - in Washington, Illinois and throughout the Midwest to support those affected by last weekend's storms. (And a special thank you goes out to "my volunteers" - those with whom I once worked - who are already on the ground in Illinois or are on their way to Illinois as you read this.)

Click here to learn more about how to support the American Red Cross.

There are so many more incredible stories of hope and resilience out of Washington, Illinois - and the other areas of the country affected by this storm - but I simply can't get to all of them here today. I hope these few were enough to brighten your Monday and remind you to, as best you're able, find the silver lining.
Posted by Chasing Roots at 4:00 AM