Tradition: The Big Event, Round 2

Our family participated the Texas A&M University Big Event - the largest one-day, student-run service project in the country and a way for TAMU students to collectively say "thank you" to the residents and communities of Bryan and College Station for supporting them while they attend the University - for the first time last March.

I considered Big Event 2012 a "win-win-win" for everyone involved, and feel exactly the same about Big Event 2013. Approximately 19,000 students, in keeping with the mission of the Big Event, directly and indirectly said thank you to members of the community and also added participation in a nationally-recognized and respected volunteer event to their resumes. Tom and I received help on a significant yard improvement project that on our own would have taken us two full weekends to complete. And our children - after meeting, engaging with, and witnessing the hard work and generosity of the "big kids" - were prompted to ask questions about teamwork, volunteering, and giving back to and improving our community.


All things considered, Will helped a decent amount by carrying bags of
mulch,raking leaves, and spreading wood chips.  Hallie didn't help at all, and
instead just snuck brownies from the spread I'd laid out for our volunteers. 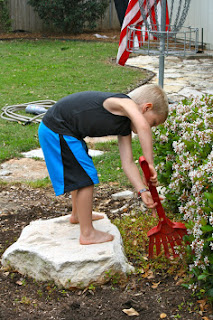 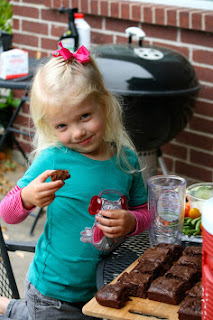 A fourth "win" could be Will's jubilation when all five of our volunteers, after wrapping up the day's work, willingly watched him practice/perform his sweet karate moves - punches and front kicks and side kicks and SO MANY inner form blocks - for 10 straight minutes.

Oh, and a fifth win could be the satisfaction Tom and I feel now that we know the exact quantity of wood chips needed to mulch our entire front, side, and back yards. In the name of inefficiency, various combinations of the four Ferri made seven trips to Lowe's to purchase wood chips (four of which were made on the day of the Big Event), but we finally got the job done and we took careful notes so as to never again have to make seven trips to Lowe's in one week.

Tom and I continue to fully support the Big Event, and plan to participate each year we live in College Station and as long as they'll accept our home as a job site. The benefits to EVERYONE involved are tremendous and long-lasting, and I feel lucky to have been a part of the Big Event 2013.