It only took three annual Cowboy Days for me to realize that Cowboy Day always take place in March, when the schools study Texas state history. And that the schools study Texas state history in March because March 2nd is Texas Independence Day. And that Texas has a Texas Independence Day (a celebration of the adoption of the Texas Declaration of Independence on March 2nd, 1836). Not sure how I missed all that the time around, or the second time around. Third time's a charm, I guess.

Anyway, back to the cowboys and their days.

In preparation for Cowboy Day I put together adorable outfits of jeans and button-down shirts and belts and bandanas and hats and boots for both kids, but on the morning of Hallie's day, she had an epic meltdown - we're talking 45 minutes of naked screaming and crying and finally heading off to school just barely dressed and with absolutely no breakfast in her teeny, tiny tummy - and would agree to wear only the jean skirt.  As in ONLY the jean skirt.  I had to pin Hallie between my legs and wrestle her into a shirt and shoes because, you know, "no shoes, no shirt, no school".

Thankfully she calmed down once we arrived at the door to her classroom, and to my untrained eye (I often observe Hallie having what appears to be a good time, but when I ask her about it later she claims the experience was actually awful) it seemed as though she enjoyed herself in Cowboyland.
Hallie was in such good spirits when we arrived home that she insisted on putting on her entire Cowboy Day ensemble, even though Cowboy Day was over.  She looked ridiculously awesome - or awesomely ridiculous, depending on how you feel about almost-four-year-old cowgirls - when we picked up Will from school that afternoon.
Will's Cowboy Day took place the day after Hallie's. That morning he decided that he didn't want to wear his cowboy boots and swapped them out for his Samba indoor soccer shoes, which according to Will, cowboys would wear if they were playing indoor soccer. He may have had a point, but I still wish he'd have worn his cowboy boots.

I was out of town that day so Tom was in charge of pictures; perhaps you might be able to tell.


Here's a picture of the yard with Will in it. 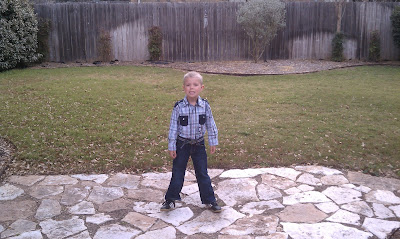 And a picture of the back of Will doing a "sweet inner form block"
(he's more than a little obsessed with karate these days). 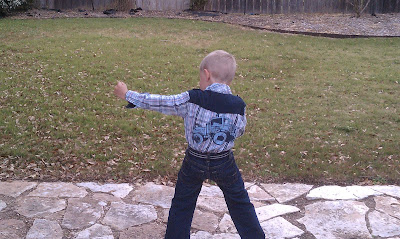 And just for fun, here's a photo of Will and Hallie on Cowboy Day 2012, when they were both considerably smaller but wore the exact same outfits and Will looked more like a park ranger than a cowboy. 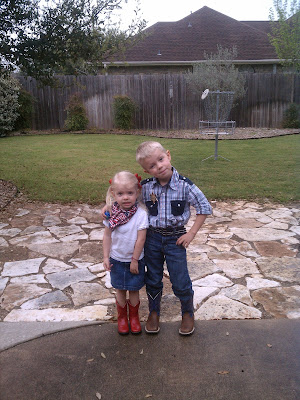 In closing, a few words of wisdom from a true cowboy...never squat with your spurs on.
Posted by Chasing Roots at 6:00 AM