It you'd given me these two quizzes at the same time and prior to doing all this "research", it's entirely possible that I would have answered more questions correctly on the Texas quiz than on the Wisconsin quiz.  I don't recall learning much about Wisconsin in school growing up - I remember studying the United States, the Middle East, Europe, and Africa, but not Wisconsin (to be clear, I remember that we studied these continents, regions, and countries.  I don't remember what we studied) - so I suppose this isn't all that surprising.

So, how well will you score on this quiz about the great state of Texas?  As with the Wisconsin quiz yesterday, the first two people to correctly answer the questions below, either in the comments section or in a message to me, will receive a little Texas-themed surprise in the mail.  Good luck! 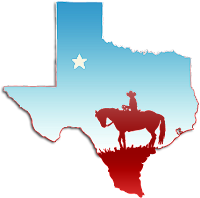 1. What is the Texas:
2. What are people who live in Texas officially called?

3. Which soda (that's another word for "pop", Midwesterners) was invented in Waco in 1885?

4. What are the names of Texas's NFL, MLB, and NBA professional sports teams?

Bonus question: Texas is the only state to have the flags of six different nations fly over it.  These flags come from which six countries?

Posted by Chasing Roots at 5:30 AM