In preparation for the snowy weather and icy temperatures I knew we'd encounter up North, I mailed complete sets of coats, snow pants, boots, hats, and mittens for all four of us to my parents house two weeks before we were scheduled to arrive. I should win an award for that level of preparation and organization, right? Wrong.

I assumed the kids had each grown only a couple of inches since we moved from Michigan and that their winter wear last worn two years ago would be fine for our trip to Wisconsin. You can imagine my surprise, then, when they pulled on their coats and snow pants and multiple inches of arm and leg were showing at the wrists of the coats and out the ends of the pants.

We compensated with extra-long shirt sleeves, large mittens, tights, and knee socks and, while I was embarrassed by my oversight, the kids couldn't have cared less. (It also helped that my two-year-old niece's coat and snow pants were too big for her, so my sister and I traded Lily's too-large snow wear and Hallie's too-small snow wear and then everything fit everyone perfectly.)  Luckily, my mistake and the kids' clothing challenges didn't negatively impact the fun we had outdoors.

Sledding was without a doubt the most popular activity. My dad built a sledding hill - using a bale of hay and the 17+ inches of snow he shoveled off of the driveway - from the top of the deck and across the backyard, and this hill was the perfect size for Hallie to start on. (We took Will sledding quite a few times in Ann Arbor, at the Lodge, and at my parents' house, but Hallie had never gone.)
The next day, Tom, my dad, and I took the Will and Hallie to an actual sledding hill in an attempt to scare the crap out of them and nearly kill ourselves.  (Unintentionally going over a jump when you're in your 30s - even if you're riding a supportive, inflatable tube sled instead of a wooden toboggan - could be compared to surviving a moderately severe car accident.  Painfully shocking and shockingly painful.)  The hill was steep and littered with camouflaged jumps, so Hallie always rode with one of us.  We let Will sled on his own, though, and he absolutely loved it.
We warned Will about the jumps, and tried to map out jump-free lines down the hill for him.  On his fourth or fifth time down the hill, Will's sled veered off course and, as we watched helplessly, launched him off a jump and multiple feet into the air.  When he hit the ground I cringed, but also breathed a sigh of relief because I didn't immediately hear crying nor did it appear that he'd broken any bones.  Turns out Will thought the jumps were the best invention since the Wii, and from that point on, his every route down the hill included "air".

The boys built a good-sized snow fort, though unfortunately weren't able to put it to good use in a snowball fight because the temperatures outside never warmed up enough for us to actually make snowballs.  The freezing cold temperatures meant that snowmen were out of the question as well.  Boo. 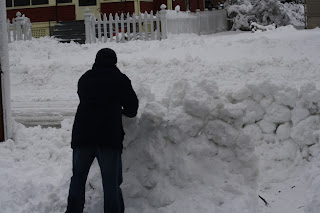 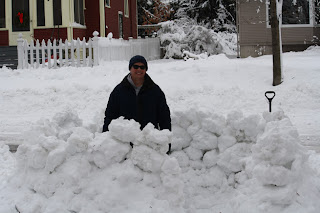 Disc golf was also most definitely out, much to Tom's dismay. 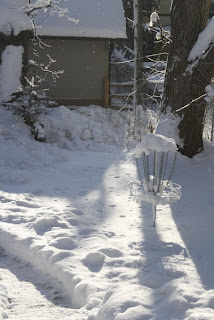 Our last winter "must try/do" activity was ice skating.  I'm embarrassed to admit that I - a born-and-raised Wisconsinite - took Will ice skating for the first time just a few weeks ago and that Hallie had never been ice skating.  I hang my head in shame.

When it comes to nearly everything physical, Will is a slow learner.  He is timid and unsure of himself, and he lets those feelings weigh so heavily on shoulders that his first attempt at anything new is usually a disaster.  Ice skating was no exception.  Despite having a cone to hold on to, he literally could not even stand on the ice.  After 15 or so minutes of struggling just to keep his feet under his body, Will gave up, tears in his eyes.  My heart breaks for him in situations like this (soccer, swimming, basketball, the list goes on), but on that day, I was secretly kind of glad to abandon ice skating because my body ached from keeping 45 pounds of kid from falling on the ice (while wearing ice skates myself).

Will may be a bit slower than others when it comes to these new and intimidating physical activities, but eventually he figures them out.  The problem/challenge is that the process takes a LONG time.  I knew from experience that Will's second time on an ice skating rink would in no way differ from his first.  Worse, I had a feeling that ice skating wouldn't pose such a challenge to Hallie, and that her success at something he struggled with would be a disaster.

I was right, to a certain extent.  Will struggled, and Hallie - equipped with a little crate to push around  (Will tried two different crates, a child-sized walker, and a hockey stick) - ice skated like it was her job.
I was also wrong, however.  Though he tried to leave the rink for the emotional and physical safety of the warming house multiple times, Will reluctantly stuck with ice skating for close to an hour, and by the end of our adventure had made enough progress that I felt it worth filming.  As he always does, my boy will get there, when he's ready.

Hallie's skating faster than it looks like she is in this video.  I'm skating backwards as quickly as I can go (without risking a fall) while I film, and she's keeping up with me easily.

You have love how Hallie just breezes by Will in this video.  Luckily he's concentrating too hard to notice.

There may have been a few things about winter in the Midwest that I didn't miss, but these winter activities - sledding, building snow forts and snowmen, snowball fights, ice skating, and making swimsuit snow angels - are high on my list of what makes the Midwest an incredible place to live.
Posted by Chasing Roots at 6:00 AM