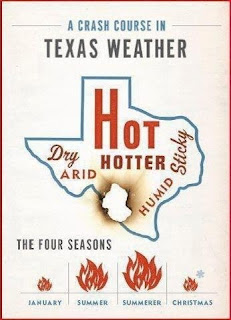 In honor of the near record-setting temperatures we've experienced this week (I'm not bragging, I promise), allow me to present to you a crash course in Texas weather.

When we first moved to College Station I was under the impression that Texas had only two seasons: summer and not-summer.  (Does anyone remember the early 90's television show Dinosaurs?  Remember how the baby dinosaur called his parents "Mama" and "Not-the-Mama"?  I loved that show, especially when the baby dinosaur hit his not-the-mama over the head with a frying pan.)  It seems I wrong, however, and if the chart to the right is to be believed, there really ARE four seasons in our great state.  Let me introduce you to them.

Season #1, known as "Winter" throughout the rest of the country, is called "January" in Texas. January (January) is warm.  Warm enough to play at the park in a tank top and have a water fight with your brother/sister in the backyard.  Warm enough to break a sweat on the walk to pick your son up from elementary school and then curse about it under your breath so your children don't hear you and repeat what you've said the following day at school.

Season #2, known as "Spring" elsewhere in the United States, is called "Summer" in Texas.  Summer (February through April) is hot.  Hot enough to go swimming, but since the swimming pools aren't yet open, your children cry every afternoon.  Hot enough to turn on the air conditioning, but since you aren't yet willing to fork over $500/month to the electric company and won't turn on the air conditioning, your children cry every afternoon.  Summer means a lot of crying.

Season #3, known as "Summer" beyond the borders of Texas, is appropriately named "Summerer" in this sauna of a state.  Summerer lasts for 112 MONTHS (May through November) and claims the sanity of countless Texas residents every year.  I can actually feel my brain cells melting whenever I spend more than 12 seconds outside during Summerer.

Surviving Summerer can be done in one of two ways.  Method #1: stay inside.  It doesn't really matter where you spend your time - home, the movie theater, the mall, the library (well, maybe not the library), Target, a bar - just as long as the joint is air conditioned.  Method #2: stay wet.  Lounge in the swimming pool, play in the sprinkler, stand under the hose (Tom's been known to tie the hose around his shoulders so that he stays wet while he works in the yard), or just keep showering over and over again.

And finally season #4, which lasts for at least a quarter of the year and is known as "Winter" up North, lasts only a day and is festively called "Christmas" in Texas.  I've yet to spend Christmas in Texas, but I'm told that though weather is still warm, if you crank up your air conditioner and put on a sweater (and close the blinds so that you can't see the green grass and blue skies outside your windows), it's possible to pretend that it's chilly outside.  I don't buy it.

So there you have it, all of my seasonal wisdom condensed into one blog post.  You're welcome.

On a related note, Northerners, if you're looking to escape the long, cold winter, feel free to visit us for Summer (which officially starts in less than a week) in Texas - we're already wearing shorts, working on our tans, and having water fights in the backyard.  All I ask in return is that when Summerer arrives, you open your doors for me.
Posted by Chasing Roots at 6:00 AM