Going on a Bear Hunt

The first weekend we were in Wisconsin, my mom ordered donuts from my favorite bakery for breakfast. She ordered three dozen donuts. There were nine of us. Nine. I had to eat A LOT of donuts, people, but I didn't complain - I'm always willing to take one for the team.

We established the night before that whoever woke up first had to pick up the donuts. This meant that my bro-in-law, Jeff, had to pick up the donuts. (My mom may as well given Jeff the job straight away, as he regularly rises hours before the rest of us. I can't quite figure out why anyone would get up at 5am on vacation.) As he was leaving the bakery, Jeff decided he really wanted a bear claw, which, though it's hard to believe, there weren't any of in our assorted three dozen donuts. Jeff was shocked when the cashier handed him a his bear claw...in a grocery bag. 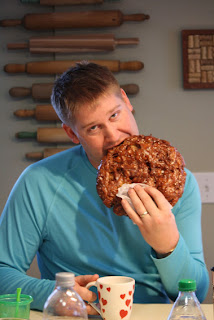 The bakery's donut version of a bear claw was the size of an actual bear claw. Or a dinner plate. Or a Frisbee. Or the moon. Take your pick.

We made Jeff sit at the kitchen counter until he'd finished his breakfast treat, and then he rolled into the living room, where he remained, unable to move, for the next six hours. (Just kidding - we all shared the bear claw. And then went to the gym.)
Posted by Chasing Roots at 6:00 AM