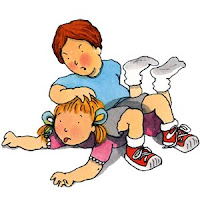 Can Behavior Problems be a Sign of Giftedness?
Today I came across this article on BabyCenter. I decided not to actually read the article, but to instead just assume that the answer to this question is yes, behavior problems are in fact a sign of giftedness. Because if this is the case, my children are GENIUSES.

GOOOOAAAALLLL!!!!
Soccer's my game. It's the only sport at which I was ever any good, for which I know all of the rules and can explain referees' calls to Tom, for which I truly understand strategy.

Luckily for me, soccer was a big deal at my high school. (When we competed against our biggest cross-town rival there were more fans in attendance at the women's soccer game than there were at the men's football game - insert collective gasp from Texas readers here.) Making the team as a sophomore and playing varsity soccer for three years put me on the high school map, and made me feel like I was worth something beyond just being an awesome daughter to my parents.

As you might expect, I watch every friendly, qualifying, and tournament game the US Women's soccer team plays - provided the games are shown on television and Suddenlink actually follows through on their commitment to broadcast the games, of course. (During last summer's World Cup, Suddenlink crapped out during the final minutes of THREE OF THE FOUR US games. We missed one overtime and two shootouts. I can't stand Suddenlink.)

Yesterday's gold medal victory by the United States Women's Soccer Team was no exception. Will, Hallie, and I gathered around the television, and for 90 minutes joined the millions watching the game on television and the 80,000 watching live and in person (a record-setting crowd for women's soccer). And while hundreds of thousands of those fans were cheering for the United States, I realized that the loudest cheers were for the sport itself, for the success of every single one of the female athletes athletes on the field that day. 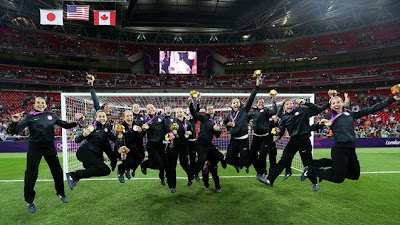 Ellen
I have always loved Ellen DeGeneres, but after hearing (for the first time last year, and again in reruns this summer) in her own words exactly what she "stands for", I couldn't help but love her even more dearly.

"I stand for honesty, equality, treating others the way you’d like to be treated, kindness, compassion, and helping those in need."

MomsEveryday: Regression
This week MomsEveryday ran Regression, a new piece in which I confess to falling back into the ways of a slightly awkward and wildly indecisive teenager every time I set foot in my parents' house. My poor mom...

Red Cross: Shopping for a Cause
Check out a few of my most recent Red Cross-themed Etsy finds (jewelry, art, totes, etc.) on this week's American Red Cross blog post. I was surprised to discover and inspired by the fact that many of the artists selling these items plan to donated a percentage of the proceeds to the American Red Cross.
Posted by Chasing Roots at 6:00 AM