After the sob fest that was yesterday's garden update, I feel like I should focus on the positive today.

For reasons unbeknownst to us, our peppers did fairly well. While we gave up on our dream of making a batch of salsa using all/only homegrown ingredients (tomatoes, onions, green peppers, and jalapeño peppers), we were able to make whip up a batch using our fresh-from-the-garden peppers.

After picking and washing the peppers, Tom fire-roasted them on the grill. And then he tried to kill me by adding 17 times more jalapeño peppers than were needed to his tomato/onion/green pepper salsa blend. 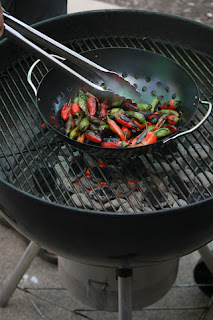 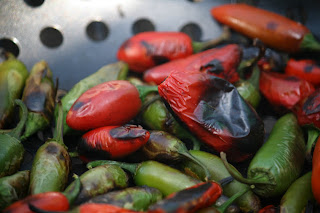 I used to be a wimp when it came to spicy foods, but since I've been married to Tom my palate has toughened up considerably. I can handle bites of the REALLY spicy foods he eats, and can almost always stick with him on salsa. Not this time. After one smallish bite my nose started to run and beads of sweat broke out on my upper lip. It took my body 30 minutes and two full glasses of milk to return to a normal 98.6 degrees. Poor Will followed up his one bite with two glasses of juice, two glasses of water, and a few unintentional tears. I hope we haven't forever turned him off to homemade salsa...
Posted by Chasing Roots at 6:00 AM