I went to college at the University of Iowa in Iowa City, Iowa. My college roommate’s boyfriend’s parents lived about 10 minutes from Iowa City, in a small town called North Liberty. Occasionally, when we needed to do laundry or longed for a home-cooked meal or desperately needed to spend the night in air conditioning, we would leave the comfortable confines of our campus surroundings and pay them a visit.

On their kitchen wall hung a “bird clock”. You’ve probably seen/heard these clocks before – instead of simply and quietly informing those within earshot of the time, they spew a different birdcall at the top of every hour. Never a big fan of birds or their calls, I was never a fan of my roommate’s boyfriend’s parents’ kitchen clock. They were (and still are) lovely people though, and listening to piercing birdcalls at regular intervals was a small price to pay for clean clothes, a warm and hearty mom-cooked meal, and an air conditioned bedroom. 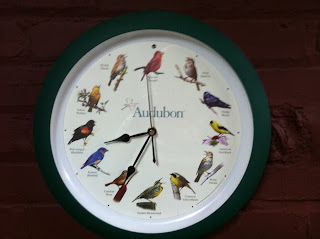 Fast forward a few pleasant, birdcall-free years. I'd returned to my own parents’ home for the holidays, and just as I was settling myself onto the family room couch and preparing to watch It’s a Wonderful Life on television, I heard the all-too-familiar piercing call of the Mourning Dove. I looked up and cringed when I saw not one, not two, but three bird clocks hanging on the family room wall. I gave my dad a look that said, “you’ve-got-to-be-kidding-me”; he gave me a look that said, “I know”.

Apparently my mom had jumped on the bird clock bandwagon, so much so that she needed three different versions of the clock. Every hour, on the hour, clock one went off, followed immediately by clock two, and finally clock three brought up the rear. The brighter the light in the room, the louder the birds.

I spent quite a bit of time in my parents' family room last month. The room is great for writing - it's in the basement so it's cooler than the rest of the house, and I like the television on in the background - except for about two minutes out of every hour. All three clocks still hang on the wall, and though my concentration and ability to finish a thought take a beating every time they go off, I've learned to live with their company. I just try to crank out the post I'm working on before the birds...