A Katniss Kind of Weekend

On Friday night I imagined myself in line outside the New York City FAO Schwartz, waiting to purchase a copy of The Hunger Games DVD at 12:00 a.m. sharp, even though it would have meant spending my evening with hundreds (thousands?) of screaming, crying teenage girls in costume. Instead I watched a cheesy romantic comedy at home and spent my evening with two screaming, crying children in costume, counting down the hours until morning. 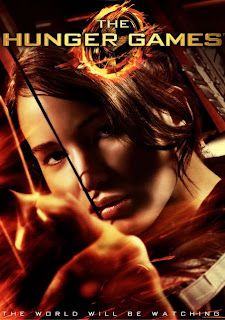 On Saturday morning I rose earlier than I EVER do on the weekend and dragged Will and Hallie with me to Target to pick up my own three-disc Deluxe Edition. As we approached the DVD display, Will yelled, "Look Mom, it's Katniss!" A few funny looks from parents within earshot led me to believe they were assuming I'd taken my five-year-old to see the PG-13 movie in the theater and were silently judging me. No, Will hasn't seen the movie. Yes, he'd LOVE to see it. To hear him tell it, I'm the meanest mom in the world for not allowing him watch this super cool movie in which Katniss, who wears a braid in her hair and is hungry for a nectarine and a handful of pretzels, shoots her bow and arrow and wins the gold medal in archery at the London Olympics. To be honest, I'm proud that Will's chosen to pay attention to and learn about (to the extent that I'll allow him to do so) something that interests me, and that he's become a fan of and developed an appreciation for a strong, female heroine with a unique skill set. So judge away, Target shoppers.

The trip to Target ended up a disappointment for Will. Not only did I stick with my previously established "we'll TALK about you reading and watching The Hunger Games when you're 10" stance, he also couldn't find a bow and arrow toy to take home with him. My excitement over finally getting my hands on the DVD translated into generosity, and I told Will that if Target had a bow and arrow for sale I'd buy it for him. Sadly, Target only sold cross bows that shot water, which wasn't at all what we were looking for. Boo.

Midday Saturday I used two polishes from my new China Glaze Official Hunger Games Collection to spruce up my fingernails and toenails.
On Saturday afternoon, while the kids were supposed to be resting/napping and then were finally actually resting/napping, I watched the movie (again). It felt like such a luxury to rewind and replay my favorite scenes, scenes that when I first watched them in the theater passed by too quickly for me to fully appreciate them. Like a 14-year-old, I watched the cave scenes three or four times.  I'll probably watch them a few more times this week. 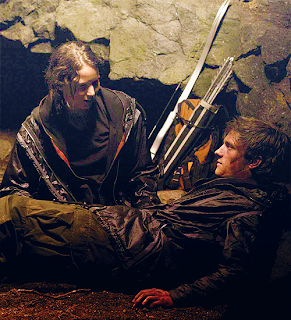 On Saturday night, after the kids went to bed (I thought seriously about putting them to bed at 6:30pm - not just because I wanted to get back to my DVDs, but because Tom's out of town and they were out of control and I wasn't sure I could survive another hour and a half with them), I started working my way through the special features. Also on Saturday night, Tom tried valiantly to hunt down Josh Hutcherson in downtown Cincinnati, where Tom was visiting for a wedding and Josh was passing through for a fundraiser. Unfortunately their paths did not cross.

On Sunday afternoon, Will asked me if I wanted to play with him. Of course I said yes, and asked him if he'd prefer Chutes and Ladders or Connect Four Launchers (our go-to games when Hallie's asleep). He replied that he didn't really want to play a board game, and that he'd rather play "characters" (superheroes, wild animals, etc.). I'm not very good at this kind of playing, which I admitted to him. He wouldn't let me off the hook, however, and came up with the perfect solution. "Mama, if you'll play characters with me, I'll let you be Katniss."

I have absolutely no idea what I'm going to do next weekend.
Posted by Chasing Roots at 6:00 AM