Few Words Wednesday...Except Not At All

I started writing this post intending to put it up on a Wednesday a few weeks back. Then, as often happens, I wrote a little, then a little more, and finally a lot more. (Such is why I do "Few Words Wednesday" posts, rather than "Wordless Wednesday" posts.)

My parents gave me a stuffed Winnie the Pooh Bear after the three of us survived a major car accident when I was just a month old. I slept with him tucked under my left arm nearly every single night until I graduated from college, and since then I have kept him close by, either in my nightstand or my closet. Winnie the Pooh - the stuffed animal, as well as the fictional character - has always been and will always be a part of me.

As an elementary schooler I told my mom I wanted a Winnie the Pooh tattoo. (I have no idea why or how I came to want a chubby yellow bear permanently etched on my body at such a young age...) She laughed, and explained to me that when I turned 18 I could tattoo myself however I saw fit.

As an 18-year-old college freshman I scoped out the tattoo parlors in Iowa City, found an artist who could "draw" the perfect Winnie the Pooh, and paid $125 of hard-earned summer babysitting money for my first (and still only) tattoo.

People used to ask me, "won't you hate it (your tattoo and/or Winnie the Pooh) in 20 years when you're old and it's faded and stretched?

Well, now that point in time has arrived. It's been nearly two decades, and I'm old and my tattoo is faded and stretched after years of basking in the sun in a bikini and then carrying two babies. And much to many people's surprise, I don't hate either my tattoo or Winnie the Pooh, not even a little bit. It's possible I love them both even more than I did 20 years ago.

Silly to some, perhaps, but Winnie the Pooh - both the bear and the stories in which his spirit starred - reminded me of the simple goodness in the world: the unwavering strength of friendship, the widespread impact of kindness, and the uplifting power of gratitude (not to mention a little gentle humor) can all brighten even the darkest days. And I wouldn't trade that daily reminder for anything. 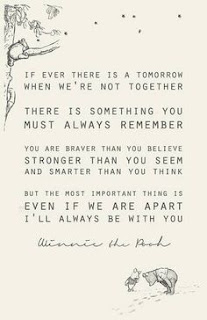 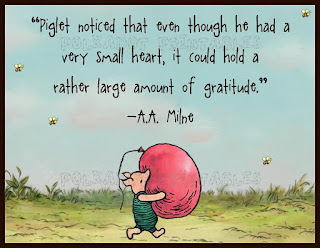 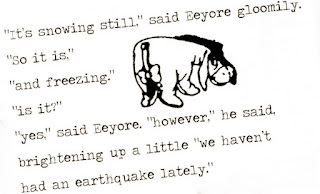 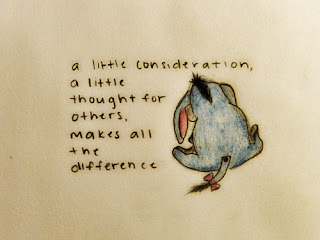 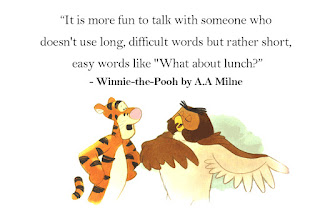 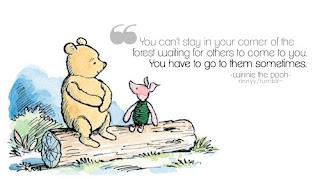 I couldn't choose which Winnie the Pooh/A.A. Milne quote to use for that "Few Words Wednesday" post, so I gathered together (just a few of) my favorites and wrote them a post all their own.
Posted by Chasing Roots at 5:00 AM