Last week a friend sent me this picture: 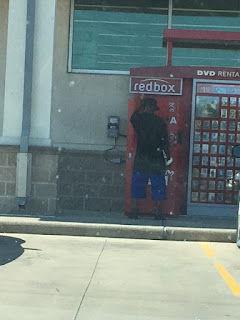 "I don't know what to say about this," she texted.

I didn't know what to say about it either...until I looked more closely and had to stifle a scream so as not to frighten the other patrons sitting near me in Starbucks. 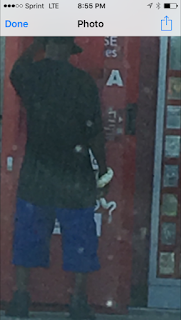 Yep. That guy is standing in front of the redbox machine right outside the Walgreens front door, casually returning or checking out a movie. And wrapped around right hand and wrist is a frighteningly large "pet" (?) snake.

My friend's family - her husband and two of her three kids - had been standing right next to this man and his snake (unaware of the snake's presence) just moments before she took the picture. They handled news of the snake significantly better than any member of my family would have.

We expect pet dogs to be leashed when they're out in public and around other people. Shouldn't we expect the same - or at least something similar - of pet snakes?

I feel like Texas is trying to scare me off this week: first sandal-footed boots (or boot-legged sandals, depending on how you look at them), and now snakes at redbox. I already worry about encountering lizards and snakes in my backyard (or worse, in my house); I shouldn't also have to worry about encountering them in line to check out Norm of the North on DVD...
Posted by Chasing Roots at 5:00 AM