I have quite a few fun, interesting, thoughtful, emotional, and/or lengthy posts in the works. But because we returned home late Monday night from a whirlwind weekend trip to California, and because I had to transition into crazy "Variety Show dress rehearsal and performance" mode the minute we landed in College Station, this week's posts are light and fun and yes, simple. And in today's case, delicious!

Texas Roadhouse is a popular steak restaurant, both in College Station and across the country. But because the staff hands out peanuts by the basket - and allows patrons to throw the shells on the floor - my family can't eat in the restaurant or even pick up carry-out meals to eat at home.

Not being able to set foot in the restaurant makes it tough (but not impossible, thanks to the occasional school or sports team fundraiser) for us to get our hands on Texas Roadhouse's delectable dinner rolls and sweet cinnamon butter. To solve this problem, I spent time this spring trying to reproduce both the rolls and the cinnamon butter at home. I have yet to succeed with regard to the rolls, but I finally nailed the cinnamon butter recipe and wanted to share it with you today...no one should miss out this deliciousness just because of a peanut allergy, or because they don't live in close proximity to a Texas Roadhouse!

I found at least five different recipes for the cinnamon butter on Pinterest, and while they all included the same four ingredients, they instructed me to use these ingredients in drastically different amounts. I started playing around with the quantities until I - and Tom - felt like I had achieved the right flavor, and as a bonus, the cinnamon butter's flavor improved the longer it sat in the refrigerator!

2. Add powdered sugar, honey, and cinnamon to butter and mix until all ingredients are thoroughly combined.

3. Let butter sit for at least 30 minutes, either at room temperature or in the refrigerator.

4. Enjoy with Texas Roadhouse's rolls or any other kind of dinner roll or french bread. 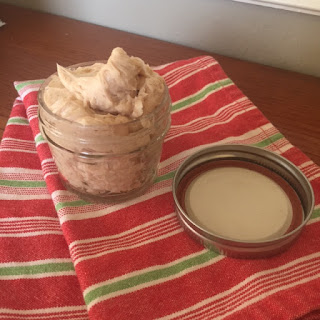 I have no affiliation with Texas Roadhouse. I just really like their rolls and cinnamon butter.
Posted by Chasing Roots at 5:00 AM