Writing
April's writing assignments kept me extraordinary busy. In addition to three posts here and two Red Cross social media engagements weekly, I worked on three posts for MomsEveryday, one post for the Red Cross, and my longest magazine article to-date. One of the MomsEveryday posts and the Red Cross post will be up next month and the magazine article will run in October, but here are links to the two posts that went up quickly if you'd like to give them a quick read!

Reading
Speaking of reading... Because I spent most of April sitting in front of my computer, I (sadly) didn't have time to read a single book. The stack on my nightstand grew taller and taller each time a title I'd reserved at the library became available, until of course the books' due dates rolled around and the pile shrunk back down to its pre-April size. My goal for the next few weeks - at least until summer vacation begins - is to spend 30 minutes every Friday reading quietly while the kids are at school. Hopefully I'll have at least one good recommendation for you at the end of May!

Watching
Hallie and I watched the first half of "Grease: Live" (I hope we can find time to finish it soon) and both kids and I cruised through the first season of Fuller House. I know Will and Hallie would also enjoy Full House, so I plan to purchase the entire series on DVD for the three of us to enjoy this summer.
I can't seem to keep up with the television shows saved in our DVR, but I managed to find a new show to watch...I'm hooked on The Catch, which follows a female private investigator specializing in fraud as she becomes entangled in a professional and personal game of cat and mouse. Now if only I had a little more time to "catch" up - as is the case with all of my other shows, I'm already a few episodes behind!

Listening To
Every May I make a mix CD for the kids and me to rock out to as we cruise around town during summer vacation. Making mix anythings may date me, but I have no plans to stop as these CDs provide me with reminders of who we were and what our lives were like each summer. Because we listen to the same 20 songs on repeat throughout June, July, and August, whenever those songs come on the radio now I flash back to that particular year. I can picture the kids at those ages, riding in their carseats in that summer's swimsuits. I can hear their higher-pitched voices, and remember which song lyrics they mispronounced or completely bungled. I can recall what they liked to play with, which books they liked to read, and what foods they liked (or didn't like, in Hallie's case) to eat. All that to say I've been listening to our last four summers' mix CDs and feeling nostalgic. Now, if you see me tearing up in my car, you'll know why.
I've also started listening to a new podcast called "Embedded", which "takes a story from the news and goes deep". Those of you who live in Texas might take interest in one particular episode - called "The Bikers" - that delves deeply into the May 2015 shootout between bikers clubs/gangs in the parking lot of a Waco's Twin Peaks restaurant.

Trying/Using
I came across "tootling" - the opposite of tattling and accomplished when one shares something positive about someone else - a couple of weeks ago, and while I haven't implemented it in our house yet, I plan to give it a try this summer! 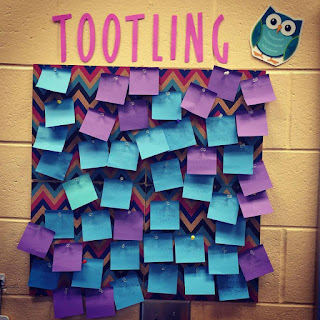 Wearing
I hate shorts, and have for as long as I can remember, but alas, I live in Texas, and therefore own a few pairs out of necessity. I recently purchased a pair from the Banana Republic Factory Store, and though I didn't really want to bring them home (my mom convinced me to do so because I needed shorts and they were on sale), now, two weeks later, I'm glad I did. Check them out here if you're in the market for shorts!

Note: I didn't love the length or the somewhat restrictive seam at the bottom of the legs, so I cut them off to a length I preferred.

Eating
This month I tried five or six new recipes, two of which went over swimmingly with the rest of my family. Both have very few ingredients, come together quickly, and taste incredible!
I might actually go make another pan of the chocolate Ritz bars right now...

Drinking
At the end of last summer I sliced off the end of my left index finger in my Ninja blender. "Pointer" (as Hallie affectionately called it as we administered extensive first aid) healed nicely - a part of the tip even grew back - but I opted to steer clear of the Ninja because I wanted to hang onto the rest of my fingers.

Once summer-esque weather arrives I like to enjoy refreshing fruit smoothies for lunch. (My favorite combination is banana, pineapple, and spinach because these fruits, unlike most berries, are naturally sweet enough to balance out the bitterness of the spinach.) Making smoothies, however, would require me to once again brave the Ninja's crazy sharp blades...which I finally did after taking the appliance out of the cupboard three days in a row. Bring on smoothie season!

Any great smoothie recipes I should try while I wait for pineapples to go on sale again? Here's my go-to smoothie recipe for those of you who'd like to give it a try!

Blend until smooth and serve with a pretty straw!
Posted by Chasing Roots at 5:00 AM