As newlyweds, Tom and I lived in Cedar Rapids, IA, where I worked for the Grant Wood Area Chapter of the American Red Cross and Tom worked for John Deere. One morning a coworker of mine mentioned that she thought her cat might be pregnant. A few hours later, when she ran home to grab lunch, she found her cat holed up in the closet of her bedroom...surrounded by five kittens. Surprise, surprise!

Tom and I adopted two of the kittens: a white one, who Tom named Duke, and the smallest, feistiest dark brown tiger-striped one, who I named Clementine. 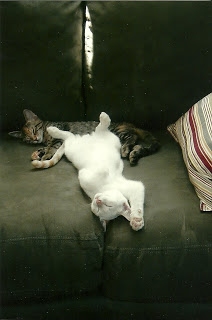 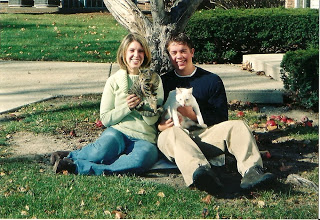 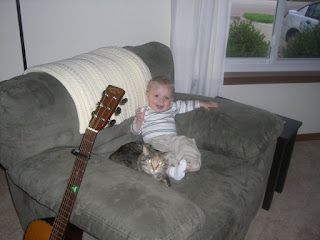 Fast forward six years, two apartments, one house, and two kids, all with Duke and Clemmy making the ride that much crazier... When we put our Ann Arbor house on the market in preparation for our move to Texas, Duke and Clemmy moved - temporarily, we thought - to Madison to live with my parents. We knew it would be easier to keep the house clean without them around, and while we of course had to disclose that cats had lived in our house at one time, we knew we'd have better luck selling if cats weren't winding themselves around prospective buyers' legs and trying to escape out the door behind visiting realtors.

In the fall of 2010, after the cats had lived with Grandma and Grandpa for a few months and we were about to move from Ann Arbor, Duke died after being hit by a car in my parents' neighborhood. We decided to leave Clemmy in Madison, rather than move her - without her brother - across the country to Texas; she never coped well with change, and because she preferred my parents to Tom and me anyway (she never really forgave us for having children), letting her remain where she appeared happy and comfortable seemed like the best option.

Four years ago, (we think) Clemmy developed an autoimmune disease. All of the hair on her stomach fell out, and while her hair eventually grew back, it was never as full or soft as it had been before. Two years ago and likely because of her compromised immune system, Clemmy developed a fungus in/on her paw. My parents and Clemmy's vet(s) spent the last two years trying to combat the fungus, but in recent months it grew worse, to the point that my parents could tell she was in pain. The plan was to amputate Clemmy's leg...until a spot of fungus showed up on a second leg.

At this point she's hurting, there are no more options to treat the fungus, and we can't amputate two of her legs, so unfortunately we have no other choice than to put her to sleep. This afternoon my darling Clementine will take her last breath in my mom's arms.

Duke and Clemmy were our first babies. The taught us to be responsible for someone/thing other than ourselves, and prepared us for the human babies we would later add to our family by regularly pooping, peeing, and vomiting on us and waking us up at all hours of the night. Duke and Clemmy may no longer live in our home, but they will always live in our hearts as a reminder of the decision Tom and I made to begin the transition from couple to family. 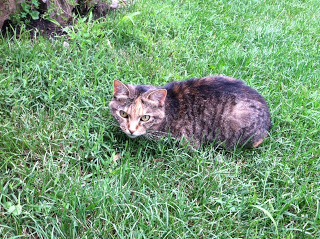