Four Eyes, We Have a Problem

All four Ferri have sensitive eyes (thank you, blue eyes, for scattering and transmitting more unwanted light to the retinas than brown eyes), so we - especially Tom and me, as we've both had surgery on our eyes - wear sunglasses regularly. Without sunglasses I can barely keep my eyes open on cloudy mornings, let alone sunny afternoons in Texas, and I've been known to keep my sunglasses on inside our brightly-lit Starbucks.

Though Will and Hallie's eyes seem to have adapted and their desire for protective eyewear decreased since we first moved to Texas, I keep sunglasses for all four Ferri on hand. Everyone has a pair in a kitchen drawer to grab when running out the door, as well as a pair in the car for those rare occasions when we forget the aforementioned house pair. At times, many of us have even had a third pair because…well…because they were cute or on sale and we couldn't pass them up.

We keep sunglasses in the same drawer as keys, and I realized last week, as I struggled to actually locate my keys among the brightly colored plastic frames and tinted lenses, that we *might* have a sunglasses problem: 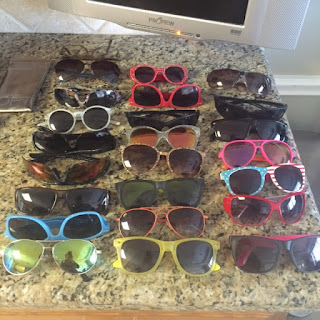 This picture does not include the two pairs I found in Tom's car, the one pair I found in Hallie's purse, and the four pairs I found in the costume basket later that evening. All in, the four of us owned 30 pairs of sunglasses. We care about the health of our eyes, but for Pete's Sake.

I staged an intervention - mainly for Will, who claimed ownership of 11 of the pairs pictured above - and cleared out close to half of our sunglasses. And then just a few minutes later I found these. And these. And these. Yes, we I definitely have a problem.
Posted by Chasing Roots at 5:00 AM