Madness, I Tell You

It began 12 years ago with a simple, friendly competition between newlyweds. 10 years ago our cat, Duke, joined the game. (Yes, Tom and I helped Duke the cat fill out his own bracket using a complicated treat- and toy-based selection system. Try not to judge us too harshly.) Seven years ago Will participated for the first time (click here to watch an adorable video of him making his tournament selections), and six years ago we entered Will's bracket in our online pool for University of Michigan graduate students and he didn't finish in last place. Three years ago Hallie participated for the first time, and though she only cared that every notation on her bracket be made with either a pink ink pen or pink highlighter, she correctly picked more than half of the first round upsets and led the competition for the first two weeks.

To keep things interesting, our 2016 family competition includes a wild card entry: last Tuesday afternoon Will and I forced Tux to helped Tux fill out his own bracket. Unlike his older cat brother, Tux did not enjoy the cat treat- and toy-driven selection process - after all, prior to Tuesday, Tux hadn't made 63 decisions in his entire life, let alone 63 decisions over the span of 45 minutes.

Inviting/encouraging/forcing Tux - and Hallie, for that matter, what with all her drama - to participate should make this year's Ferris Family Bracket Breakdown interesting, entertaining, and possibly maddening…after all, no one wants to lose to a cat or a little girl who makes her selections according to which school names look prettier written in pink permanent marker.

I admit that the competitor in me wants to win. Badly. (And I wonder why both of my kids have such strong competitive streaks.) But the mother in me wants - as I've wanted for the last few years - Will to take home the victory. He deserves it given the madness he puts up with on a daily basis. 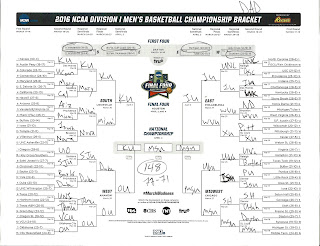 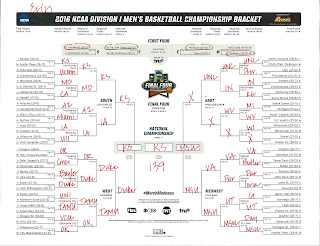 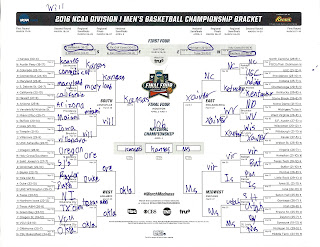 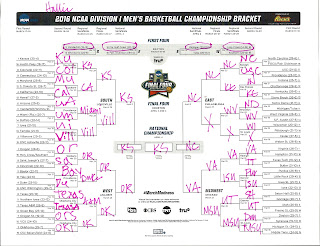 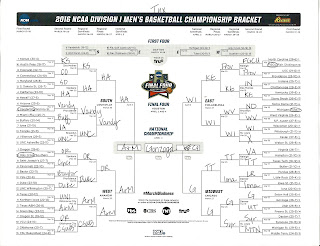 Are you participating in March Madness? If so, did this past weekend bust your bracket or are you still going strong?
Posted by Chasing Roots at 5:00 AM