I decided to bring the "Currently" posts back this year, but to change them up a little. I took out some of the previously used categories - Weather, Needing, Wanting, Feeling, Thinking, and Enjoying - and replaced them with Writing, Reading, Watching, and Trying/Using. Each of the current categories relates to an active part of my life, but also allows me to share with you books, websites, television shows, movies, music, products, stores, and recipes I think might interest you and those in your life.

Let's give it a try!

Writing
I find myself in a bit of a writing funk right now, but reminding myself that I feel this way every January gives me peace of mind that "this too shall pass" come February and March. Though I didn't take on any copywriting projects in January, I did write two blood donation posts for the American Red Cross that will hopefully run in the next couple of weeks; I'll share them with you as soon as I can!

Reading
Midway through the month I finished The Martian. Some Most of the scientific calculations outlined by the author via the main character went in one of my physics-challenged ears and out the other, but the story captivated me from the first page to the last. If you like science, space, adventure, and/or foul-mouthed protagonists, The Martian won't disappoint! 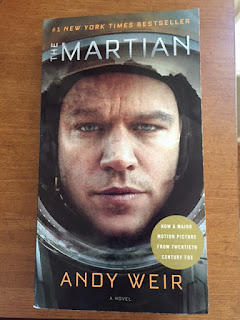 Watching
I finished reading The Martian as quickly as I did because I wanted to watch "The Martian" with Tom. He fell asleep 16 minutes in (don't let that influence whether or not you see the movie - Tom hasn't stayed away for an entire film since 1999), but I enjoyed putting faces with the characters and comparing my imagined Mars to the Mars constructed by the film's creators. The movie doesn't top the book, but watching Matt Damon "science the hell out of space" was absolutely worth two hours and 20 minutes of my time.

Listening to
The Pentatonix CD has played on a loop in my car since I received it as a Christmas present. Will wants desperately to learn how to beat box, so while we listen to the same seven or eight beat box-heavy songs over and over and over again, I busy myself with picking out harmonies and Hallie works on memorizing which voice goes with which group member. Not everyone enjoys a cappella music, but I love it and seem to have passed at least a fondness for the style on to Will and Hallie. 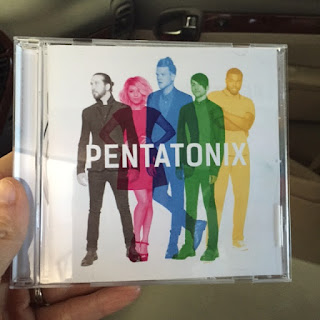 Trying/Using
For my birthday last November Tom bought me a pair of wireless headphones. A nice gesture? Yes. A product I'd actually use? No. He kindly synced them up for me anyway, and convinced me to just try them once while I walked outside and talked to my mom on the phone at the same time…and I was hooked. The sound comes through and my voice is transmitted so much more clearly than with any of the other headphones I've owned, and not being tethered to my phone feels freeing. (Here's a link!)

Wearing
Slightly behind the trend as always, I have developed an obsession with ankle boots. I bought a pair last fall and have worn them so often (nearly every day) that I felt justified in picking up both a gray pair with buckles and slouchy army green pair a couple of weeks ago. I texted Tom shortly after I left the store and congratulated him on finishing his upcoming holiday shopping…"thanks for the boots you bought me for Valentine's Day!" 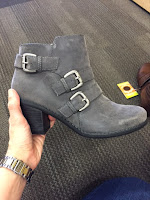 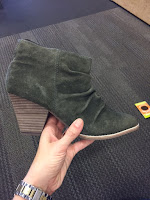 Eating
If you know me in real life, you know I love to bake. I regularly use my ole' standby recipes for chocolate chip cookies, oatmeal raisin cookies, gingersnap cookies, brownies, carrot cake, and banana bread, but I try to alternate these recipes with unique and quirky ones to keep things interesting for my taste-testers. Throughout the last 10 years, many "this sounds questionable but I'll make it anyway" recipes - like pineapple upside-down cake, pina colada cupcakes, and key lime coconut cookies - have become household favorites.

I have, however, hit a cookie wall. I bake cookies often - for events at school, for the moms at dance on the 2nd Tuesday of the month, for my kiddos - and I need new cookie recipes…the problems is that I honestly can't find any that make me want to jump up from my computer, run into the kitchen, and preheat my oven.

Can you help? What are your favorites? Share with me, and I'll share with you! (Links to some of my favorite cookie recipes coming on Friday!)

Drinking
December threw every aspect of my schedule - including my eating and drinking habits - for a loop, so throughout January I focused on getting back into a routine. For two years my mid-afternoon fruit punch Spark has helped me stay healthy and energized, and I feel great now that I have these vitamins and minerals nourishing my system once again.

On an unhealthier front, I enjoyed a few too many glasses of wine throughout the month. I have an excuse though: a friend of mine is hosting a wine-themed birthday party for another friend of ours next month, and she needed wine bottles and corks for her decorations. So really, I was just doing my part and helping out a friend.

So, how'd we do? Happy reading, watching, and listening!
Posted by Chasing Roots at 5:00 AM