1. After misplacing his Fitbit more than seven months ago, Will finally found it in the pocket of our swim bag - thank goodness for winter swimming lessons! An hour later, either while climbing around the McDonald's playground or changing into his Tae Kwon Do uniform in the car, Will lost his Fitbit again. Talk about highs and lows… After searching the car and inquiring at McDonald's, we declared the Fitbit gone for good. Until a week later, that is, when Will found it tucked inside the lining of his car booster seat. Hallelujah! It's been attached to the waistband of his pants (including his pajama pants) ever since.

2. In other Fitbit news, finding Will's Fitbit prompted me to sync mine up with my computer for the first time in…weeks? Months? When I did so I was pleasantly surprised to discover I'd earned the Sahara Badge, recognizing my 2,983 miles of travel from the Atlantic Ocean to the Red Sea. What a way to live vicariously...

3. I spent last Friday night painting with friends (our goal for the year is to paint a canvas for each major holiday), and on Sunday I found my newest creation a home among my Valentine's Day decorations. 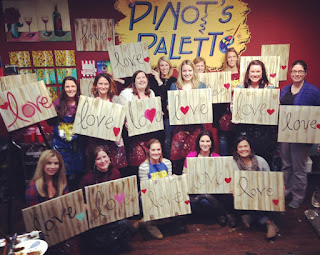 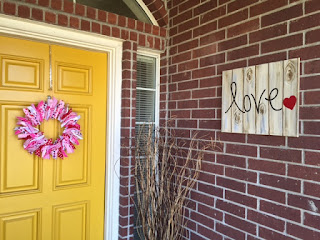 4. After a great college football season, we moved on to college basketball. Our Hawkeyes jumped to an impressive #3 in the latest AP Poll (sure would be nice to get to watch them on television - how about it, Suddenlink?) and the Aggies - coming in at #5, look solid as well. Thanks to the reading programs at the kids' elementary school, we had the opportunity to cheer for them in person at their game last Saturday afternoon. 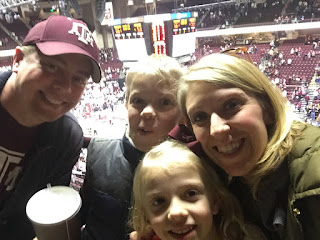