Oops, We Did It Again

19 degrees on an overcast winter day really doesn't feel that cold when you first step outside and the adrenaline takes over your nervous system. It isn't until 45 seconds later, when you return to the warmth of the house and aggressively wrap yourself in a fresh-from-the-dryer towel, that you realize you can no longer feel your feet. And legs. And backside.

Can you guess where this is going?

That's right, my friends…we did it again.

As Will and I mentally prepared for the annual Mueller family swimsuit snow angel tradition, he generously offered to "take over" for me. "I can go by myself, Mama. If you think you'll get too cold I can carry on the tradition for you."

While I appreciated Will's offer, it made me all the more motivated to get my swimsuit-clad butt out into the snow. Will's gesture also led to the realization that since my 65-year-old dad still makes a swimsuit snow angel every year, I likely won't officially pass the torch until I've reached the age at which he eventually stops participating in this tradition. Perhaps in 20 or 25 years my dad, me, Will, and his future son or daughter can make swimsuit snow angels together.

Perhaps this year's biggest surprise was Hallie, who, against all odds and bets, participated for the first time. I fully expected her to back out at the last minute, but when the time came she "suited" up and followed Will and me out onto the lawn. In the end she made the prettiest snow angel - she cared considerably more about the details than either Will or me - of all three of us. 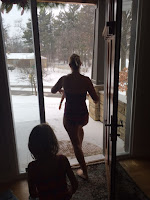 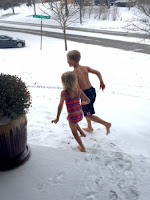 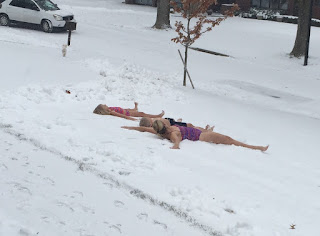 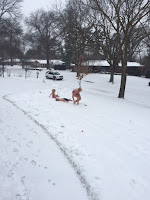 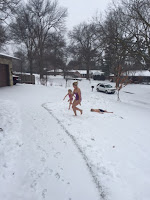 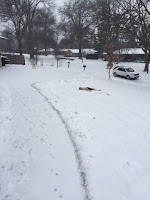 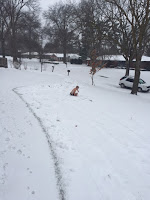 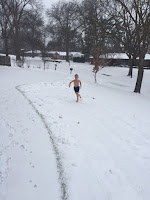 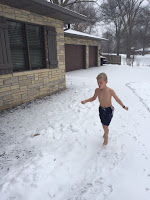 As you can see from the photos above, Will remained in the snow "long" (15 or so seconds) after Hallie and I finished our snow angels and ran inside. He called the experience "refreshing", so much so that he went back out and made a second snow angel a few minutes later. That boy still has Midwestern blood...

I've never been much of a risk taker. I like roller coasters and thrill rides, but I don't jump out of airplanes or participate in extreme sports. I occasionally purchase a nice pair of jeans, but I don't spend money extravagantly or invest in the next big "million dollar idea". I require seat belts and helmets and vaccines - not just for my kids, but for all my people - all the time. Making snow angels in my swimsuit is the one crazy, semi-risky thing I do, and while it isn't much, it's mine and I'm proud of it.

Oh, in case you're wondering about Tom's role in all this…he watched, bundled up and longing for Texas' warm weather, from inside the front door.

Here's the story behind the swimsuit snow angels, as well as a glimpse into 2013's outing. It didn't snow in 2014, so Will and I played football in our swimsuits in 18 degree weather.
Posted by Chasing Roots at 5:00 AM