Green Texas: It's About Time!

I took note of how our city and its major university handled recycling shortly after we moved here. In short, while recycling programs existed, participating in them required such significant amounts of time and energy that few people participated in them. I'm not suggesting that no one here recycled. I am, however, saying that because of the flawed recycling programs, I regularly came across garbage cans overflowing with recyclables, both on my street and every time I set foot in a campus building.*
Having grown up in cities with progressive recycling programs, Tom and I couldn't not recycle. I bought four mid-size trash cans in which to separate our aluminum, #1 and #2 plastics, brown glass, and clear class and set them up - lined with the city's mandatory recycling bags - in the garage. In front of the cans I placed a large cardboard box where we collected our recyclable paper and above the cans I hung a large plastic bag where we could store smaller plastic bags until my next trip to the grocery store. (Despite my commitment to reusable bags**, one or two rogue plastic bags make it into our house each week. And while the city didn't - and still doesn't - recycle plastic bags, Kroger does. High five, Kroger!) 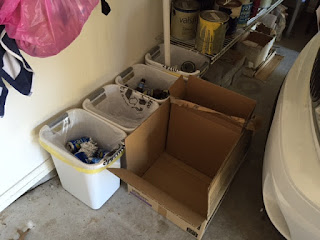 I admit to grumbling a bit about the time and expense associated with setting up our recycling station, and when the garage became a sauna in the summer or an icebox in the winter, I definitely complained about spending my Tuesday nights and/or Wednesday mornings tying up bags, flatting cardboard, and making multiple trips to the curb. But as time went on I began to forget how easy recycling had been back in Ann Arbor, where absolutely every single recyclable item - with the exception of #5 plastics - went into one large bin.

And then the exciting news… After a successful single-stream recycling trial last summer, College Station would implement single-stream recycling - a system similar to what we had in Ann Arbor and what my hometown has had for more than a decade - in January. As in this month. As in this week. On Monday morning a brand new, shiny blue bin full of recyclables sat at our curb, next to our half-full garbage bin, waiting for its big moment. **

A friend of mine once asked me about recycling, about why we participated when it took so much more effort than simply tossing the recyclables into the trash can. I asked her, politely but sincerely, about why she didn't participate. Yes, recycling costs money and takes time. But it conserves resources, saves energy, helps protect the environment, reduces the amount of garbage sent to landfills, and saves money in the end because 1) selling recycled materials can offset the cost of recycling, and 2) the environmental benefits listed above have economic value. Simply put, if we don't take care of our planet, it won't be here for our children and grandchildren and great grandchildren.

My hope is that this new system will lead to both an increase in and a shift in attitude toward recycling in our community. A greener Texas awaits!

* TAMU has done an amazing job overhauling their recycling program since I wrote the post linked to above. Such an amazing job, in fact, that Tom says that finding a trash can now is as difficult as finding a recycling bin was five years ago.

** When I wrote this post on Sunday night I had high hopes for Monday's recycling pick-up. As I edited the post to include this note on Tuesday morning, I felt more than a little defeated. Though the recycling truck made its way through our neighborhood, it SKIPPED MY HOUSE. The truck picked up at other houses on my street, but left my bin - and a couple of others - completely untouched. (And I followed all of the rules about where to put the bin, when to have it out, etc.) Argh.