A few people have asked how our (new this year) summer plan - a bucket list-less blend of organization and spontaneity, checklists for school work and screen time, and a fun way for the kids to earn a little extra money - worked out, and if we regretted ditching the bucket lists of summers past. Here's my (longwinded and multi-part) answer!

1. After three years of summer bucket lists and behavior plans, this year we changed gears. I registered the kids, per their request, for a number of lessons and camps, but after I added these activities to our master calendar I also added large blocks of free time at least a few afternoons a week. 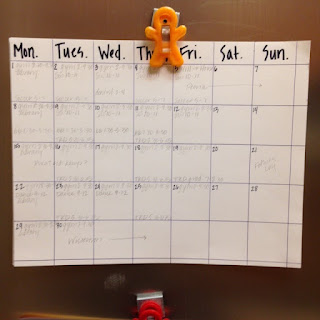 Verdict: A-  Though not all of our extracurricular activities played out as well as we'd hoped (Will's pneumonia forced him to miss portions of soccer camp, basketball camp, and his first session of swimming lessons), the amount of time the kids spent participating in camps and lessons was perfect. We easily fit in daily trips to the gym and weekly trips to the library, and we had plenty of time for play dates, swimming, and visiting the movie theater. Next summer's calendar will look very similar to this summer's, as for the first time in four years we found exactly the balance I'd hoped to find.

The one negative? I didn't get nearly as much writing done as I would have liked. Shocker, I know.

2. To help the kids stay on track and prepare for the upcoming school year academically, I created individual "School Fun" guides for the kids to follow. 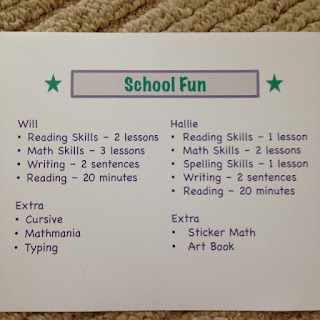 Verdict: A-  In June, both Will and Hallie cracked open their books and cruised through their work with smiles on their faces and without involving me in any way. In July, we kept up with reading but stepped back from writing, spelling, and math, mostly because I didn't want to carry their heavy workbooks (every ounce counts when you fly!) with us on our travels. In August, their enthusiasm waned so I didn't ask them to "study" every day. I tried to strike a balance between working hard enough to stay on track but not working so hard that they began to dread going back to school. I plan to use this same School Fun guide next year, editing it only to make it age/grade appropriate.

3. To keep us from turning to television or gaming systems too often, I created this "Before Screen Time" checklist. 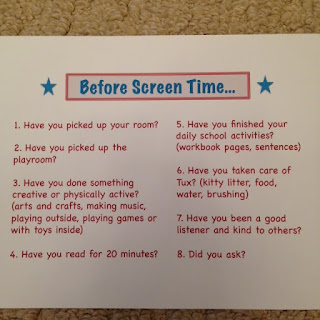 Verdict: A  For the first week of summer I had to remind the kids about the checklist, but after that they almost always remembered what needed to be done before they asked to watch a cartoon on the iPad or play a game on their 3DS devices. I LOVED this system and will absolutely, positively use it again next summer.

4. Last but not least, the kids could earn a little extra spending money (hello, Pokemon addiction) by choosing a job out of the cup and completing the job to my satisfaction. 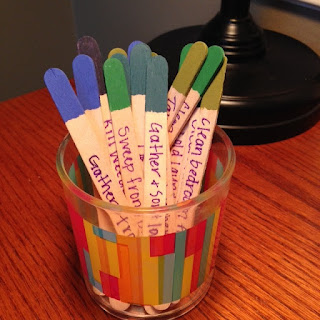 Verdict: B-  While I like this idea, its success ebbed and flowed. I wonder if it might work better if the potential earnings were visible, perhaps in baggies hanging beneath the jobs names/descriptions on a job bulletin board. I may change this up before next summer, but in the meantime, my popsicle sticks will stick around. I'm ALWAYS willing to pay someone $1 to unload the dishwasher.

What worked well for you this summer? What did you throw out the window?
Posted by Chasing Roots at 5:00 AM