1. Though not a high five, I begin this post by acknowledging today's anniversary. On difficult days such as this one, a moment spent in recognition of and appreciation for the peaceful beauty and faithful hope that surround me does wonders to lift my spirits. That and this quote, which I return to year after year.

I truly believe that the most appropriate way for us - as individuals and as a country - to remember and honor those who lost their lives on September 11th is to embrace peace, look to the future, and open our arms.

2. Tom and I made plans to replace our nearly-as-old-as-our-marriage and somewhat rusty patio furniture, but when we couldn't find anything we liked and that wouldn't break the bank, I decided to breathe new life into the pieces we already owned. I painted the two tables and four chairs, and then bought new cushions and pillows using some of the money we saved by buying spray paint instead of entirely new furniture. (I LOVE throw pillows of all kinds, so the opportunity to buy a few for the back porch made me all kinds of happy.) I'm thrilled with the finished product, even if it did result in a carpal tunnel flare-up. Now if it would just cool off enough for us to actually sit outside… 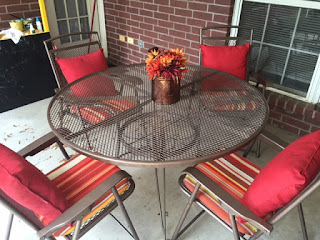 3. I recently learned that Reading Rainbow, one of my favorite children's television programs of all time, is available on Netflix! The kids and I watched Season 1, Episode 1 this week, and much to my delight, they LOVED it. (The episode featured If You Give a Mouse a Cookie, how bowling balls are made, and how to build domino chains. Fascinating stuff!) I'm looking forward sharing with Will and Hallie this wholesome, educational, and entertaining programming…especially my favorite episode of ALL TIME. Teamwork, baby.


4. Tomorrow evening Kyle Field officially reopens as the largest collegiate football stadium in Texas and the third largest in the country. The celebration begins this afternoon, continues throughout the weekend, and includes ceremonies, statue unveilings, live music, tailgating, and even a Yell Practice for kids. I'm particularly excited about the kids' Yell Practice because let's face it, it's unlikely I'll ever again be able to stay awake late enough for an actual (Midnight) Yell Practice. Gig 'em, Ags! 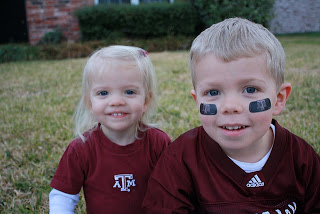