What initially seemed like simply an interest in Beyblades has recently turned into an obsession.

It all began when Tux discovered that Beyblade arenas make comfortably secure beds in which to nap. 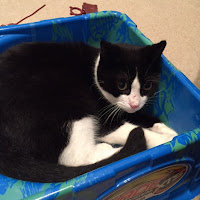 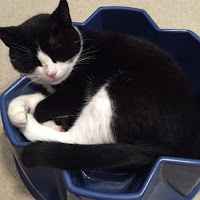 One particular nap took place on top of a Beyblade, likely because Tux couldn't figure out how to remove the Beyblade from the arena, and from that point forward Tux became particularly protective of any Beys left in the arenas.

The kids called me into Will's room one afternoon. When I arrived they were laughing at Tux, who was making the face below (we called it "step away from the Beys…") and shielding two Beys. Tux attacked any hands - even Will's - that came within six inches of his toys. 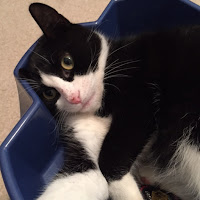 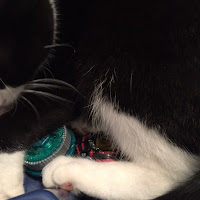 The following morning, when Will flipped on the light in his closet and walked in to pick out his clothes, he caught Tux red-handed. Yep, Tux had made his way onto the closet shelves, snuggled down into a Beyblade arena, and found himself a Bey with which to play. 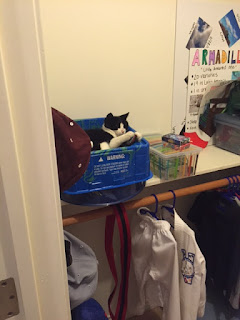 Will tiptoed out of his room to find me and my phone, and when we returned we took the picture above. Then I accidentally kicked the door and startled Tux into fumbling and dropping the Bey he had been playing with. The look on his face made it clear we were not to come any closer to him or his Beys. 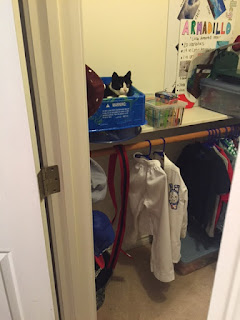 He even shielded the Bey from us when we did dare approach. 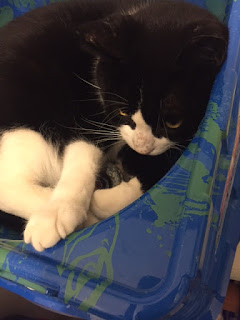 I guess we know what Santa will be bringing Tux for Christmas!
Posted by Chasing Roots at 5:00 AM