You won't find "adventurous eater" on my resume. Though I've never been a particularly picky eater and I enjoy trying new recipes, I rarely choose to cook with or eat dishes that contain unfamiliar ingredients.

As Michiganders, when Tom and I ordered delivery or take out food we rotated through pizza, burgers/sandwiches, and Chinese. Tom frequently requested Mexican but I agreed only occasionally; when we did order Mexican, I opted for a "chicken fajita taco, hold the rice and beans and add french fries". Yes, I omitted the rice and beans and added french fries to my Mexican food order. (Hangs head in shame.)

And then we moved to Texas, home to some of the most delicious Tex-Mex restaurants in the country. The change in my tastebuds happened slowly, over the course of three or so years during which we tried countless different restaurants' versions of tacos and refried beans and queso and salsa. And now I can't get enough.

When it occurred to me how much progress I'd made, I decided to branch out even further and try a few other southern staples. Turns out chicken and waffles - one of the strangest culinary combinations I'd ever heard of - are a match made in heaven. Fried okra, when prepared well, perfectly marries healthy and unhealthy, sweet and salty, and smooth and crunchy. And sweet tea? Oh, sweet, sweet, sweet tea…you complete me. 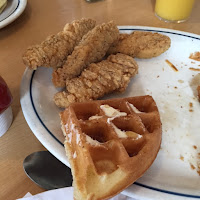 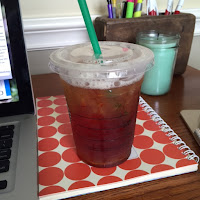 While interviewing at TAMU five-and-a-half years ago, Tom dined with two professors who no longer ate meat and steered clear of nearly all BBQ and Tex-Mex restaurants. When Tom asked them why, they both explained that when they first moved to Texas they had regularly consumed (perhaps in excess) plate after plate of the regions's best BBQ and Tex-Mex dishes…and then they had heart attacks and bypass surgeries.

So I guess what they're saying is that I shouldn't live every day like it's Taco Tuesday…
Posted by Chasing Roots at 5:00 AM