A few months ago I confessed, here on Chasing Roots, my greatest fear about moving to Texas: guns. I went on to explain my personal history with weapons, as well as what role weapons play in my and my family's lives now, and finally I wrote about our decision to begin slowly exposing Will (and eventually Hallie, should she express an interest) to bows, guns, and the like both at home in Texas and this summer in Wisconsin.

The time we set aside for this exposure - "summer in Wisconsin" - arrived two weeks ago, so one quiet afternoon at the Lodge, Tom and Grandpa Mike took Will outside to review what he'd learned during his first weapons lesson earlier this year. Will recalled the safety information as well as how to actually shoot a bow, so he easily picked up where he'd left off. 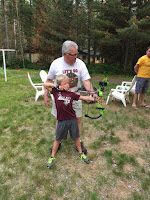 I, on the other hand, didn't do quite so well. After my safety lesson I stepped up to the line, loaded the bow, and shot my first arrow wide left, above the target, and into the woods. And the bow string hurt my arm so badly that I didn't actually shoot a second arrow. You should probably stop calling me "Katniss"...

The following day Will stepped it up a notch, firing a Red Rider BB gun (just like the one Ralphie asked Santa for in A Christmas Story) for the first time. I didn't feel nearly as nervous as I expected to feel, watching Will shoot at Grandpa's targets with the bb gun; perhaps the sight of him confidently operating the bow prepared me. 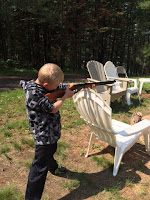 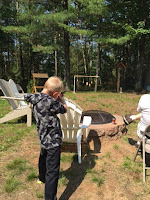 After the BB gun, Will tried out a BB pistol. This weapon, unlike the BB gun, made me anxious and uncomfortable. When I looked at the gun I could categorize it as purposeful - as a tool used for hunting - but when I looked at the pistol I could only see a dangerous killing machine that didn't belong in my innocent eight-year-old's hands. I breathed a sigh of relief when Will decided he preferred the BB gun to the BB pistol. 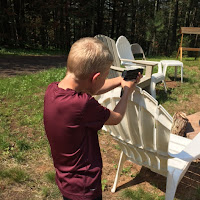 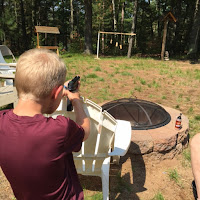 Finally they moved on to the pellet rifle, which ended up Will's favorite because of its scope. He had no trouble closing one eye and lining up his shot; I, on the other hand, can't wink and therefore couldn't even look through the scope to see the target. Shooting will never be my sport. 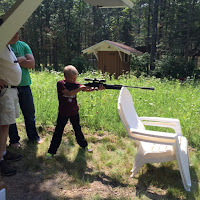 With each of the three guns, Will started by balancing them between the slats of a lawn chair to help him steady his hand and practice aiming. Eventually he was able to shoot the BB weapons without the chair, but the pellet rifle weighed far too much for him to hold, let alone aim and shoot, on his own.

As it turns out, Will is a pretty good shot for an eight-year-old. Grandpa had set up a "shooting range" in the yard, and Will could consistently hit both the hanging targets, some of which were as small as two inches by four inches, and the soda cans balanced on the top of the wooden frame from distances ranging between 50 and 100 feet.

I still don't understand the fascination with and enjoyment in shooting things, but I've learned that just because I don't understand those feelings doesn't mean they aren't authentic for others…like Will…and like Tom. I have struggled - and continue to struggle - to accept how different "my boys" and I are from one another and to foster interests and passions that differ so dramatically from my own. So while I may have let Will "go out back and shoot stuff" (knowing he was in the best of hands with his Grandpa), after a few minutes I had to walk away. Right now that's the best I can do.
Posted by Chasing Roots at 5:00 AM