As promised, the story behind my fear of frogs and toads...

As a high school student I held both part- and full-time jobs during the summer months. When my hours fell short of a 40-hour work week, my mom "helped me" fill my free time with projects around the house, one of which was washing the outside of the living room windows. On the chosen morning, after we set the ladder up in front of the house, I climbed to the third rung with my bucket of soapy water and began scrubbing off summer's dead bugs. After 20 or so minutes, I glanced down and took note of what I thought was a leaf resting on the bottom rung of the ladder. Upon further inspection, however, I realized the leaf was actually a toad. I scurried to the top of the ladder and screamed for my mom, just as the toad hopped up a rung and eight inches closer to where I cowered in fear. The toad's jump had to have been a fluke, but in that moment I felt sure he was chasing me. 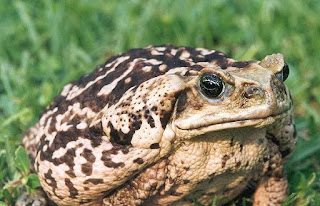 My mom came to the window and asked "why in the world" I was screaming; I tried to answer, but my words caught in my throat and I instead pointed to the bottom of the ladder. "Oh Erin...", she replied with a calm but amused tone in her voice. "Wait here", she added as she turned away from the window and walked into the kitchen. As if I could go anywhere - down the ladder was definitely not an option.

A minute later my mom returned to the window carrying a fully-loaded super soaker water gun, and in an attempt to scare/force the toad off the ladder, she leaned out the window and doused him. He refused to hop away from the stream of water, however, instead basking in the surprise shower like a puppy getting his belly scratched. (Except grosser, because toads are gross.) My mom burst out laughing and I burst into tears, convinced I would never get off of the ladder.

She finally let me come inside through the living room window and graciously never made me finish washing the windows. Come to think of it, those windows are still pretty dirty some 20 years later…maybe I'll send Will out there to finish the job this weekend. That's what kids are for, right?
Posted by Chasing Roots at 5:00 AM