When Your State Changes How You Parent

My biggest fear when we moved to Texas was not living hundreds of miles away from our familial support system, nor was it having to catch lizards under Tupperware in my kitchen and kill snakes with a weedwacker in my backyard. My biggest fear was the guns. I knew, of course, that I was unlikely to encounter Texans showing off their weaponry in the grocery store, but I also knew that the probability of Will and Hallie being exposed to guns was considerably higher in Texas than anywhere else we'd ever lived.

So Tom and I taught the kids what to do should they ever find a weapon or are with someone who finds a weapon. We talked to them about how they should never say they have a weapon or pretend to shoot someone. We don't allow them to watch television shows or movies or play video games that glamorize violence, nor do we allow them to play with pretend weapons that look like real weapons. We don't let them play at friends' houses unless we know and trust the parents.

Considering the fact that I had absolutely no intention of ever letting our kids touch or shoot guns in real life, I felt like we'd covered all of our weapon-related bases.

Let me pause to give you a little background. My parents didn't own guns. Tom hunted once or twice as a child, but he and I don't own guns. I have never even touched - let alone fired - a weapon of any kind. Weapons scare me in a way that almost nothing else does and I avoid them like the plague.

But then Katniss Everdeen, wearing her braid and toting her bow and igniting a rebellion, arrived on the scene and suddenly I was interested. When I acknowledged - a difficult and emotional task - that a small part of me wanted to know what it would feel like to hold a bow in my hands and let an arrow fly, I had a realization about my boy.

Like many boys his age, Will's eyes light up at the mention of guns, bows, swords, nunchucks, and throwing stars. We seem to have instilled in him a healthy fear and respect for weapons, but he is undoubtedly intrigued. I realized that if Tom and I don't give just a little, the possibility exists that Will's intrigue will grow and he will find a way to learn more about weapons without our guidance.

Friends of ours received compound bows as Christmas gifts, and a couple of weeks ago they invited Tom and Will to join them at an indoor shooting range to try out their new weapons. After a great deal of soul-searching, I agreed to let Will go with Tom, as long as weapon safety received as much focus as did "shooting stuff". Upon returning home from their outing, Tom assured me that he and his buddy taught the boys everything they needed to know and Will assured me that shooting a bow and arrow was the greatest thing ever. And that I would love it. 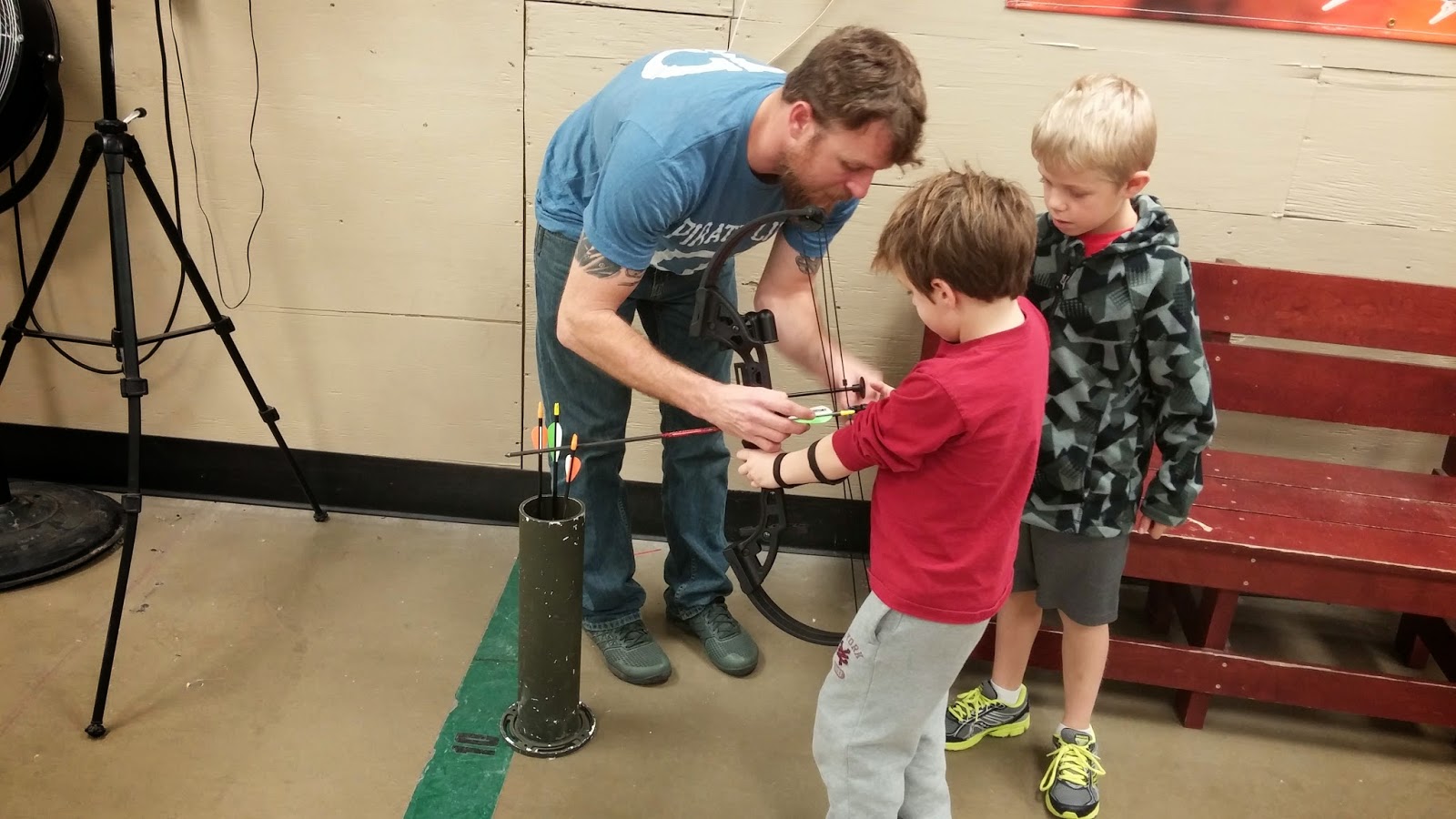 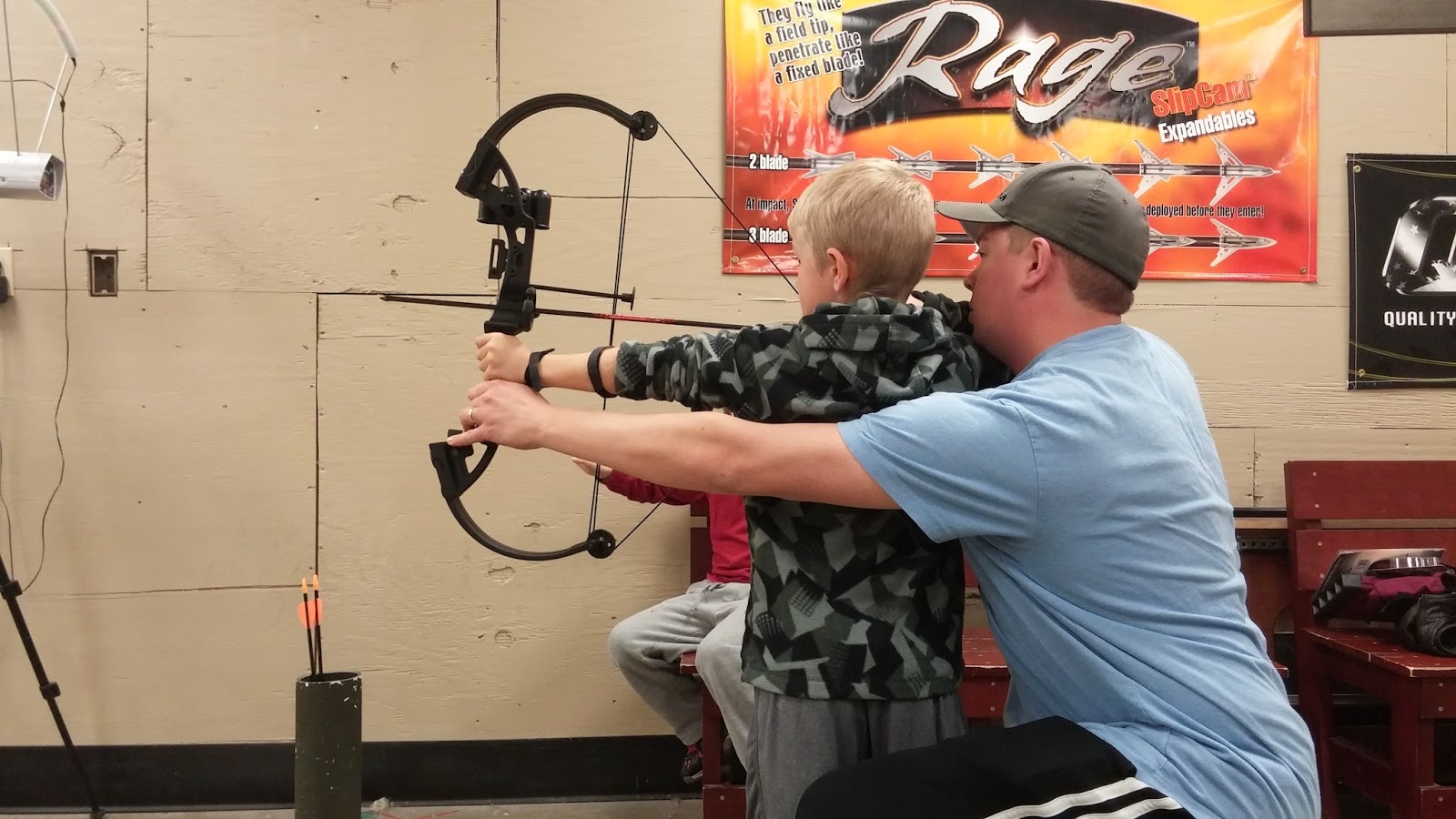 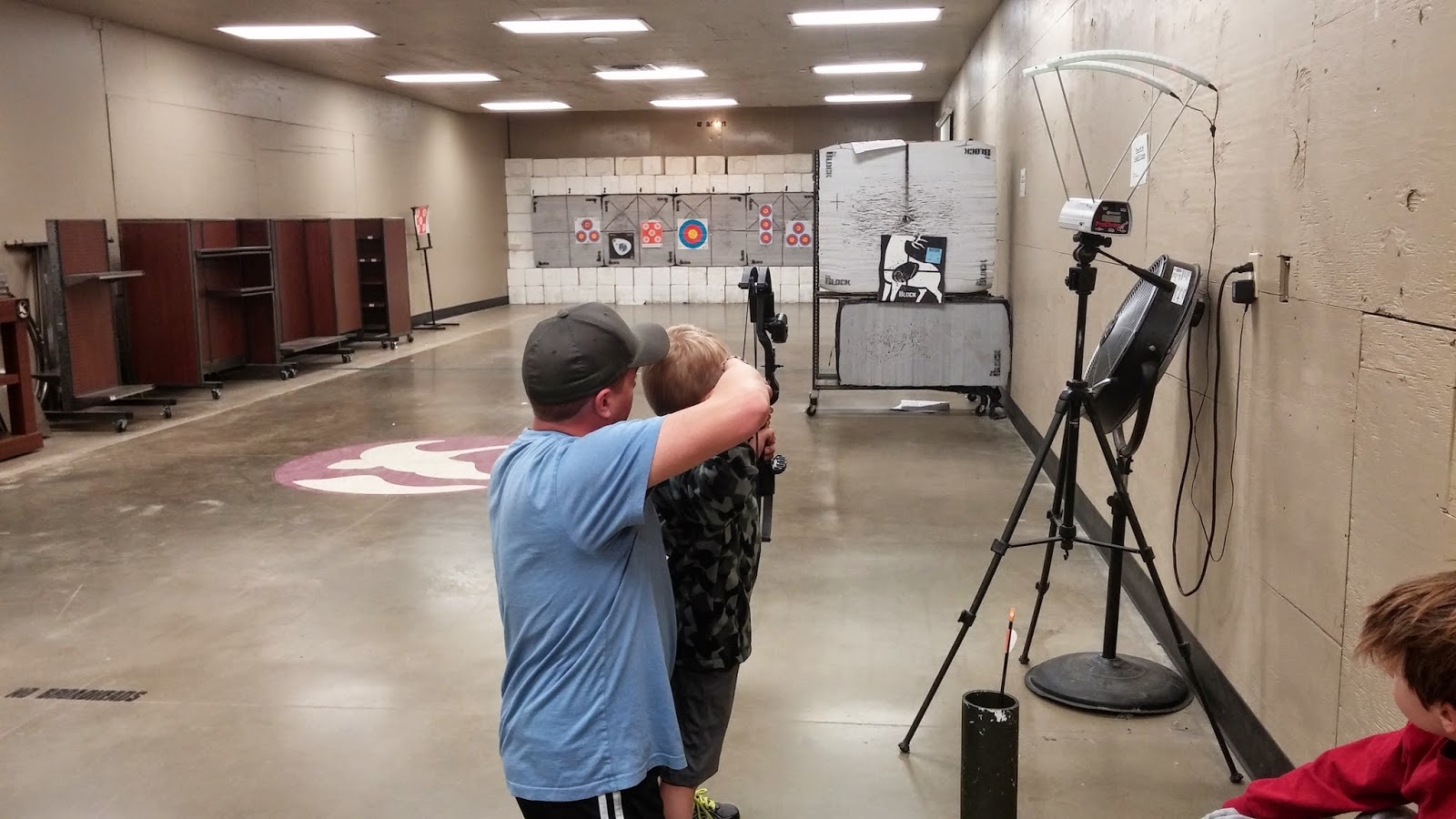 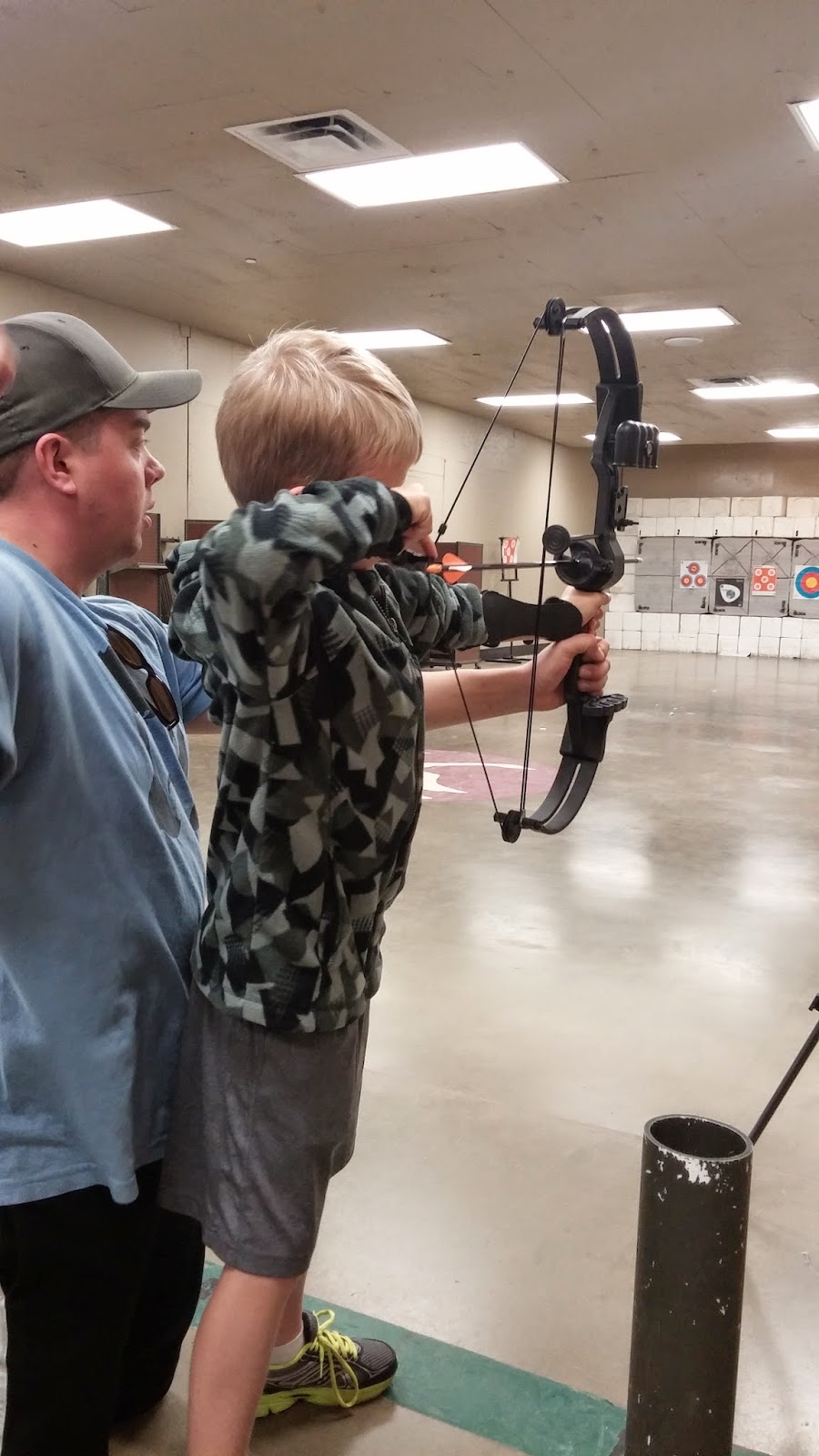 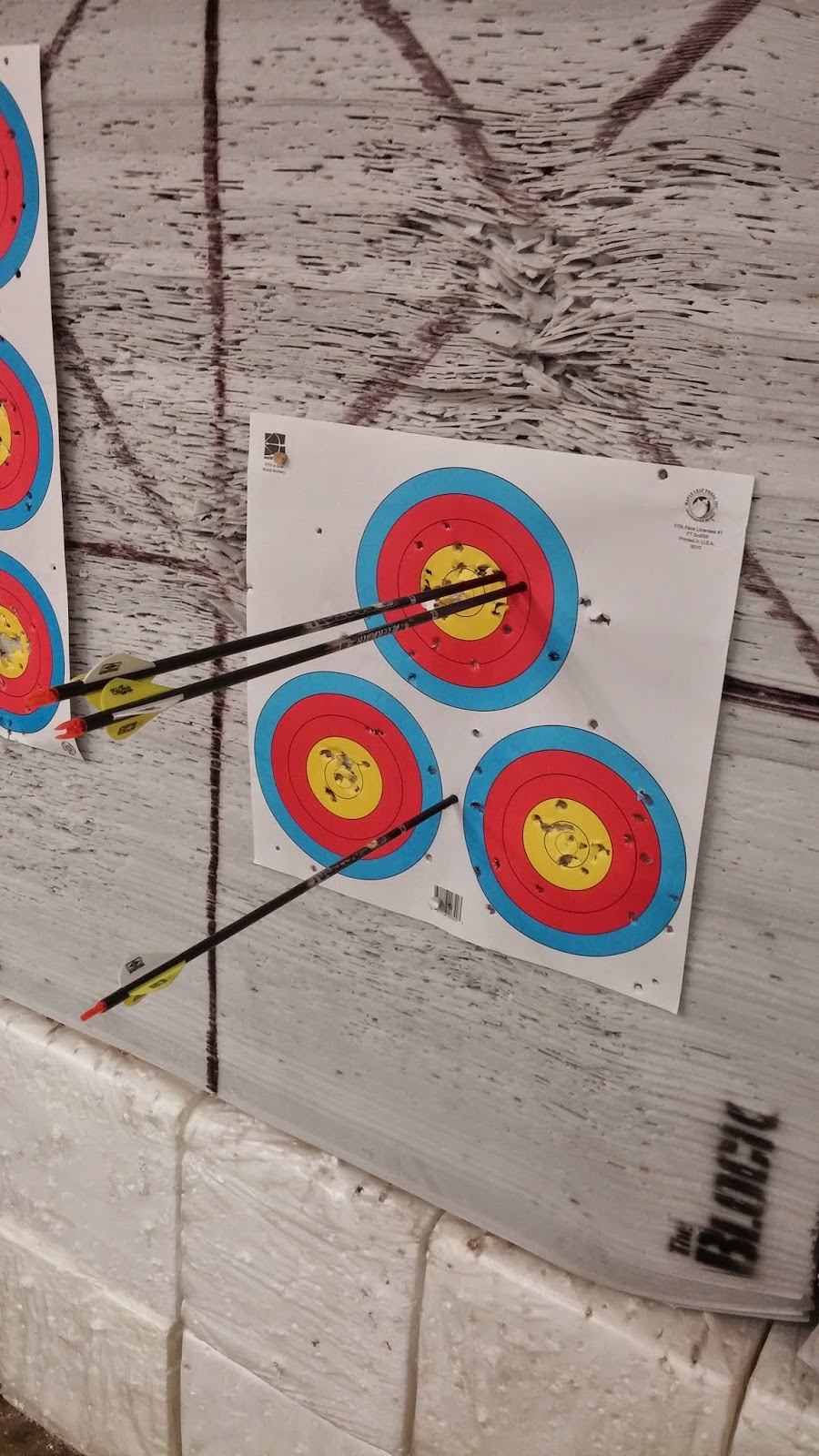 This summer, Tom and his dad - who still has the 20-gauge shotgun Tom hunted with as a boy - plan to take Will out for a gun-safety and hunting field trip. I can't help but feel simultaneously excited and terrified for my boy.

The decision to allow Will - and eventually Hallie, if she expresses an interest - to have these experiences was not an easy one to make. I honestly believe that if we hadn't moved to Texas I would have stifled my intrigue and followed through on my declaration to never let our kids go anywhere near weapons. But in more ways than one, Texas has changed the way I parent. I want my kids to respect and fear weapons (in what I would describe as a "healthy" way, rather than in an all-encompasing, semi-paranoid way like me), but I also want to prepare them for what they may be exposed to growing up in this state.

It seems I'm growing (up?) as well…emotionally, mentally, and in the direction of a Texan. Maybe someday I'll have grown enough to find out for myself if shooing a bow and arrow is actually "the greatest thing ever".

I have no interest in starting a debate about gun rights and/or gun control. The possibility of a debate about either developing here on Chasing Roots causes me anxiety and is the primary reason why, throughout the four years I have written Chasing Roots/A Midwestern Girl in Cowboy Country, I have only used the word "gun" - with the exception of in reference to water-shooting toys - once. Once, in four years. (Comparatively, I've written more than 20 posts about lizards and nearly 100 that mention the weather.) I welcome comments of all kinds and questions about just about anything, but please, if you start or join a dialogue, do so with good intentions and take a kind approach.

Thank you to everyone who has already visited, "liked", and/or shared the new Chasing Roots Facebook page. If you haven't yet had a chance to check out the page, click here!
Posted by Chasing Roots at 4:00 AM