When I signed Hallie up for dance last fall I did so with hesitation, as I was worried about introducing her to what I referred to at the time as "dance culture". I wasn't necessarily concerned about dance moms (have you seen that show?! Those are some crazy ladies. Thankfully the moms with whom I converse during Hallie's dance lessons are nothing like that), but the focus on appearance. The focus on costumes and make-up and hair and perfection.

I found myself pleasantly surprised, however, once Hallie's dance lessons began. Back in October I wrote the following on our family blog:

"So far (we're only a month in) she loves it, and I've seen very little of the culture I feared. We've yet to experience a recital though, and I worry that when performances roll around, that focus on turning four-year-olds into teenagers will rear its ugly head."

Turns out I was right to worry about the recital, but it wasn't costumes and hair and make-up that rubbed me the wrong way…it was something else entirely, something completely unexpected.

Our family's morning was busy. Tom had a commitment until 11am (the time at which we were scheduled to arrive for the dance rehearsal), so he and I decided that I would bring Will with me and then set him up with something to do until Tom could pick him up no later than 11:30am.

When the kids and I arrived at the rehearsal venue, we joined the crowd of parents and dancers and siblings filing into the building and down the hallway toward the dressing room. I knew Will shouldn't come into the dressing room with us, so I asked him to sit in the hallway and either read his book or play a game on my phone until I could get Hallie ready and come back for him.

10 minutes later, as I was helping Hallie into her tutu, two individuals (both affiliated with the studio and who shall remain nameless) turned off the lights in the dressing room (to quiet the nearly 100 moms and dancers milling around) and announced that they needed "Erin, who has a little boy in the hallway" to immediately come speak with them.

I jumped up and hurried over, worried that Will had misbehaved, and then had this conversation with one of the women while Will looked on and listened in.

Woman: Do you have a little boy in the hallway?
Erin: Yes, I do. Was he misbehaving?
Woman: No, he wasn't misbehaving. He's being very good.
Erin: Well, is he in the way then?
Woman: No, he isn't in the way.
Erin: I'm confused then - what's the problem?
Woman: He's a boy.

The tone of her voice made it sound like she was referring to a predator rather than a seven-year-old little boy who just moments earlier had been completely engrossed in trying to beat my phone at Wheel of Fortune.

I just stared at her, completely confused, until she spoke again.

Woman: You need to move him. Now. Out of the hallway. He can't be in the building. 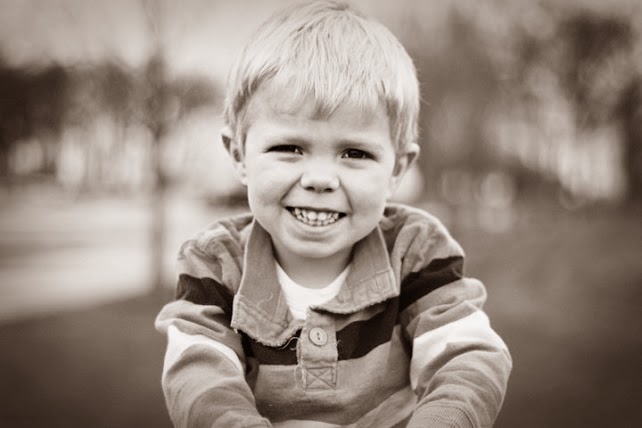 With tears of anger, frustration, and embarrassment stinging my eyes, I quickly passed Hallie off to a friend, grabbed my purse, and left the building with Will. I texted Tom and asked him to hurry, not so much because I was worried about Hallie and wanted to get back to her, but because I was afraid I would unintentionally take out the unpleasant emotions I felt on my confused, hurt, and innocent little boy.

To be clear, I understand that there comes a point when boys and girls should be separated. Little boys should stay out of the dressing room while little girls are changing, which is why I parked Will in the hallway, where he was unable to see anything and fully engaged in a quiet activity. But to ban them from the building in which the dressing room is located? To require them to remain outside, unattended, surrounded by strangers, and next to a busy parking lot?

No mention of the "no boys allowed" policy had been made prior to rehearsal, though after rehearsal I saw on the door of the building a sign that read NO MEN OR BOYS ALLOWED. (Yes, it was in all caps, and yes, it looked like it belonged on the wooden door of a little girl's treehouse.) I hadn't seen the sign the first time we'd entered the building because of the huge crowds of people blocking the door. If I'd seen the sign, maybe I would have waited to take Hallie in until Tom arrived. Or maybe I would have sent Hallie in with a friend. Or maybe, just maybe, I would have done exactly what I did do, because while there is certainly a line of which to be mindful, I honestly don't believe I crossed it.

I began the 2013-2014 dance year hesitant but hopeful. As the year went on, my hesitation slowly waned and I found myself enjoying the experience much more so than I ever though possible. My sweet girl loves to dance, and watching her plie and twirl and tap as though doing so is the reason she was put on this earth fills me with joy and pride.

But after today's encounter, dance is just a little bit tainted. I tried to forget about the conversation, the anger and frustration and embarrassment I felt, the confusion I saw in Will's eyes. I tried to push all that aside to allow only joy and pride to fill the void. But I couldn't quite beat back the hurt I felt for my little boy who, before he left with his daddy, asked me to hug Hallie and wish her good luck since he couldn't do it himself. I couldn't quite subdue the hurt I felt for my little girl who, upon learning that her big brother hadn't seen her dance, tried to hide her disappointment from me.

After today, dance is a little bit tainted and it's all I can do to just take deep breaths.
Posted by Chasing Roots at 6:00 AM