The Detroit Tigers run a clever marketing strategy based around the idea that every fan has a favorite player on the team. Television commercials, radio personalities, and print advertisements all ask, "Who's Your Tiger?" every chance they get. Over the years our family has had quite a bit of fun selecting and rooting for "our Tigers".

1. Placido Polanco
Tom's had bad luck with his Tigers sticking around, which is why he has four Tigers compared to the two the rest of us have. Placido was Tom's first Tiger, primarily because they both have really substantial heads brains.  At least that's what I think brought them together. 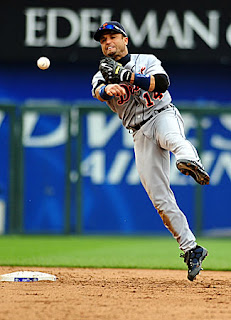 2. Joel Zumaya
Joel "Zoom Zoom" Zumaya, who became Tom's Tiger when Placido was traded, held a special place in Tom's heart because of their shared love of video games. Zoom Zoom actually spent time on the bench because he injured his arm playing Guitar Hero. 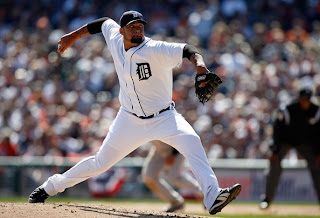 3. Brandon Inge
Brandon Inge was kind of a "filler" Tiger for Tom. A pretty hot/cold player, Inge was a great fielder but only a mediocre hitter, and both Tom and I liked him a little less when he tackily tattooed his kids' names down both of his arms. 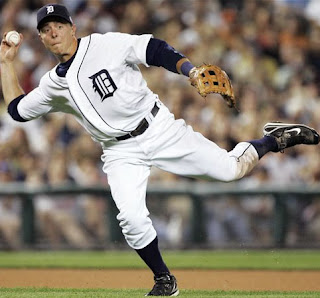 4. Jose Valverde
Tom's newest and current Tiger is a fiery pitcher - a closer, to be exact. His pitching is fun to watch, but his celebrating is even better. 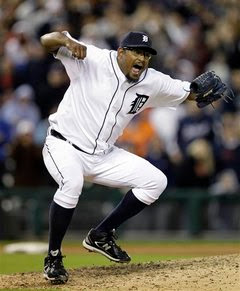 1. Curtis Granderson
Quite the looker, isn't he? I chose Curtis not for his good looks, however, but because he's a really good person and that's honestly what I look for when choosing professional athletes for whom to root. It literally broke my heart when he was traded to the New York Yankees, the one team I always root AGAINST. 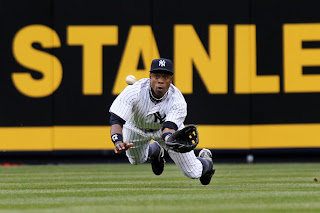 2. Austin Jackson
I'm not sure why I picked Jackson - I was partially blinded by my grief over losing Curtis to the Yankees, but I knew I needed a new Tiger and Jackson just felt like he was supposed to step into my world. 1. Magglio Ordonez
Tom and I chose Mags for Will on his 7th day of life, but we let Will choose whether or not to keep Mags on as his Tiger once he was old enough to understand what the heck we were talking about. Will liked Mags' hair, so Mags stayed. 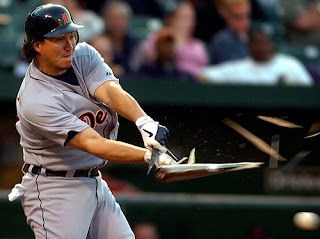 2. Prince Fielder
Will liked Mags a little less once he cut his hair, so it was actually a good thing when Mags was traded and Will could pick a new Tiger with better hair. Crazy head and facial hair seem to be how Will selects who to root for. 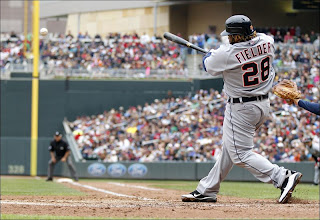 She marches to the beat of a different drummer, that one.
Posted by Chasing Roots at 6:00 AM