Here we are, already halfway through 2012. At the beginning of the year I made three sets of New Year's Resolutions: personal resolutions, Red Cross-related resolutions, and Texas-related resolutions. When I started working on this post I thought it would be fun to assess my progress in each of these three areas, but now that I've read through my lists, I'm not so sure. It appears I haven't done as well as I would have liked, and it seems that reviewing my lists will, instead of fun, be semi-embarassing for me, the gal who lives to cross accomplished tasks off to-do lists. I'm thankful six months remain before we ring in 2013...

Stop giving in to Hallie's ridiculous bedtime demands and teach that girl to GO. TO. BED.

Tell anyone who's stayed overnight at our house in the last six months that this was one of my resolutions and they'll likely burst out laughing. We don't give in to Hallie's demands, but that doesn't mean she doesn't come out of her room 1,472 times each night in need of a cup of water or a Tums or a different pair of pajamas or because "THERE'S PEE COMING OUT!!" Tom and I have different strengths and weaknesses when it comes to parenting, and in general, Tom is better at enforcing bedtime. That being said, one night I heard Hallie demand he get back in her room and sing her a bedtime song ("I want 'Bedtime Bear', and I want you to sing like a Mommy and stand on your tippy toes and turn around in a circle while you sing") and he did it, exactly as she wanted it done. We're weak, I tell you. Weak. 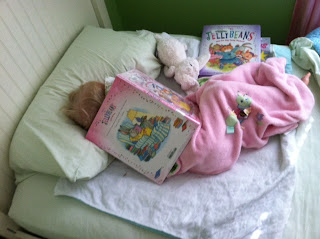 Teach Will how to independently use his inhaler and epi-pen in preparation for kindergarten.

I'd say we're 90% there on the inhaler. Will knows when he needs his inhaler and how to use it with supervision, but he's yet to go through the entire process - determining the need, getting out the inhaler, and administering two puffs of medicine - all by himself.

When it comes to the epi-pen, we're only about 50% of the way to self-sufficiency. Will knows how to open the storage container, remove the epi-pen, remove the safety, and stab the needle into an orange. But the fact that we can't safely allow Will to experience what it will feel like when he needs his epi-pen makes the teaching process more difficult. We can stab oranges until the cows come home, but Will won't truly grasp the process until he's much older (and can conceptually understand what it would feel like for his airway to close) and/or is exposed to peanuts. Just typing "is exposed to peanuts" nearly gave me an anxiety attack - I HATE food allergies.

I always have a list. Once or twice I actually stuck to the list. In my defense, most of the items I throw in my cart that weren't on the list are things like bathroom cleaner, sunscreen, and paper towels. And shoes for Hallie. Shoes for Hallie are my kryptonite.

Meet Tom for a lunch date at least once each month. Choose restaurants where our meals cost less than $20 combined.

We've been on/to one lunch date, one double date with my sister and brother-in-law, and one wedding in six months. Not great, but it could be worse. Finalize our will, set up a 529 plan for Hallie, and start contributing regularly to both kids' 529 plans.

Double fail. I think I'm going to write "set up a 529 plan for Hallie" on Tom's to-do list for July. (While I'm out of town, of course.) It sure would be nice to return home and have this taken care of.

Address the "Ferris Family Recliner Situation". More specifically, reupholster Tom's teal recliner so that it can move from the garage to our bedroom. OR...purchase a new recliner and convince Tom that the new recliner is in fact his old recliner reupholstered.

My first complete success! For Tom's birthday my parents purchased him a brand new, beautifully neutral, and unbelievably comfortable recliner. I positioned it in our bedroom, a lamp and small table within arm's reach, facing the television. For the first few hours Tom was skeptical, but once he accepted that the old chair was going and the new chair was staying, he started to feel the love. Six weeks later, he's working toward the goal of spending at least three hours a day in the chair. He's there now. He'll probably sleep there tonight.

Read one book each month and figure out how to check out library books on my Nook. The second half of this resolution is dependent on our library getting their butts in gear and actually following through on their promise to make library lending available to Nook and Kindle users; I'm crossing my fingers but not holding my breath.

I've read at least one book each month, many of which are worth mentioning in case some of you are interested in picking up a good read at the library this summer.
- 10th Anniversary by James Patterson and Maxine Paetro
- Dune Road by Jane Green
- I'll Walk Alone by Mary Higgins Clark
- At First Sight by Nicholas Sparks
- Triple Jeopardy by Richard Speight
- 11th Hour by James Patterson and Maxine Paetro

I was about halfway through The Lord of the Flies when my father-in-law lent me his copy of The Hunger Games by Suzanne Collins. I basically stopped speaking to and caring for my family for the length of time it took me to read this book - I literally couldn't put it down. I've since read Catching Fire, the second book in the series, and am about to start Mockingjay, the third and final book in the series. I'm not sure what I'll read when I've finished, but I'm pretty sure boring old Lord of the Flies isn't going to cut it anymore.

Knit two scarves for friends/family members who live in climates where scarves are worn.

For some reason I can only knit when it's chilly outside, so while I knitted two complete scarves back in February, I've yet to tie them off because spring and summer took over. It's stupid, I know. It would take me all of 12 minutes to completely finish both scarves, but I just can't bring myself to pull them out of the drawer right now. I'll finish them - and hopefully a couple more - in early December, just in time for Christmas.

Climb into bed no later than 11pm with the goal of turning off the light by 11:30pm. Skip the late-night reruns of Grey's Anatomy - it's not like I haven't seen them all two or three times before.

Another fail. Every Sunday night I'm awake until at least 1am, engrossed in Grey's reruns as if I don't already know that Izzie has a brain tumor or that Meredith and Derek get married on a Post-it Note. And every Monday morning I curse my alarm as it it's the damn thing's fault I only got five hours of sleep the night before. Friends who I see in the mornings at school and/or the gym, now you know why I always look so rough around the edges on Mondays.

Take the initiative when it comes to play dates for the kids and getting together with friends.

I've done a pretty good job on this one, even though - as with many things - there's still room for improvement. We've had some great one-on-one and two-on-two play dates with Will and Hallie's friends, and I've organized a number of both small and large-scale get-togethers at our house and local parks. July will be kind of a bust for us as far as our Texas friends are concerned, but I plan to actively pursue a couple of play dates with my friends' kids and my kids' cousins while we're in Wisconsin.

I haven't done nearly as well when it comes to people we know through Tom's job and our neighbors so that's an area for growth for the second half of the year. We've "owed" our neighbors dinner at our house for about five months, and we've "owed" friends from Tom's department dinner out for like a year. It's embarrassing and we're lucky these people still talk to us. I just don't know where our time - especially our weekends - disappears to...

Get to know at least one neighbor well enough so that when we go out of town we have someone we can ask to check on our house. And to make sure Tom's television set isn't stolen.

Not yet. Just don't steal our television set, people - after his family, it's Tom's most-prized possession.

Stop complaining about the heat.

Ha.  In all seriousness, the weather here in Texas has been much more tolerable this summer than it was last summer. It's still HOT, and even hotter weather still lies ahead, but I'm surviving. Sweating lots, but surviving.

How about you? How are you doing on your New Year's Resolutions?
Posted by Chasing Roots at 6:00 AM