The Ringling Brothers Barnum and Bailey Circus made a three-day pit stop in College Station, and on a whim, Tom and I decided to take the kids. I'd been to the circus only once before, when I was little, and had no idea what to expect; if anything, I assumed the circus would be kind of clumsy and a bit grungy, like the traveling carnivals that stumble through town and set up shop in the mall parking lot twice a year.

Boy was I wrong.

We arrived an hour before the show started because we didn't purchase tickets ahead of time and wanted to make sure we could get the best seats possible. As luck would have it, all tickets - that would usually cost between $15 and $25 - were $10. The doors opened a few minutes after we bought our tickets, and we were excited to head inside, if even just to walk circles around the exterior of the arena (the circus was held at Reed Arena, where the TAMU basketball teams play), because it was ridiculously hot outside. What we found when we walked through the doors was in and of itself worth the $40 total we spent on our tickets.

The kids had a blast watching the pre-show clown, trying to balance feathers on their fingers and noses, and checking out the animals. They also enjoyed the circus treats - baked pretzels, popcorn, nachos, and lemonade - we allowed them to indulge once we found our seats and were waiting for the show to start. 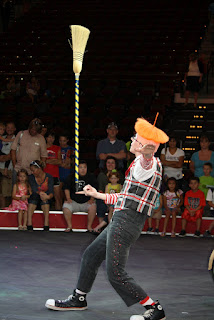 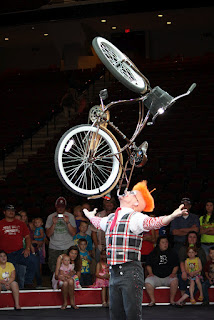 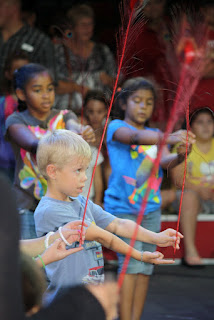 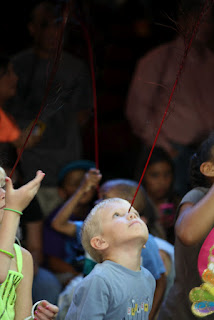 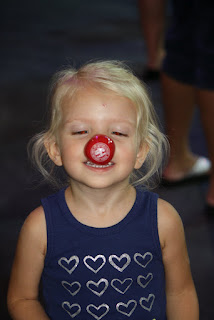 And then, holy cow the circus, people. It was amazing. Will was absolutely beside himself the entire show. He sat on the edge of his seat or jumped up and down for two hours straight. I literally saw his jaw drop three times, and he needed to be shushed often because his excited cries were distracting the people sitting around us. Hallie loved the animals, but wasn't all that impressed with the human stunts. She's in general difficult to impress, so I wasn't all that surprised. She was quiet for the first 45 minutes or so, but then started to get ants in her pants. Though it was too bad she missed the last 30 minutes of the circus, we were grateful when she finally fell asleep in Tom's lap.

Tom and I agreed that the circus was leaps and bounds (ha!) above anything we could have imagined. The human stunts were so awesome and death-defying - and I'm not exaggerating - that at times I had to look away because I was so scared for the performers' safety. I actually thought to myself, "if your mother knew what you were doing right now...", every time the aerialist jumped rope on the outside of the double spinning wheel or the acrobats hung from the ceiling of Reed Arena by their toes. I'm so old.

Here are a few more pics from our Night Under the Big Top! 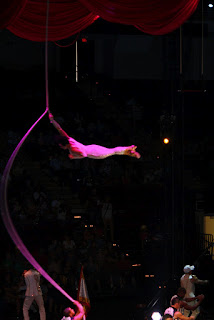 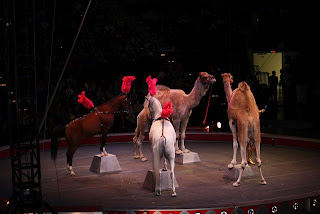 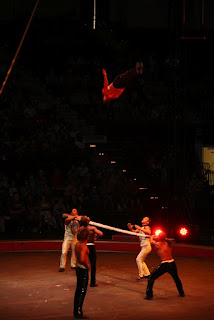 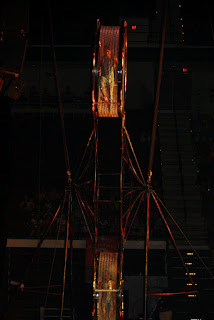 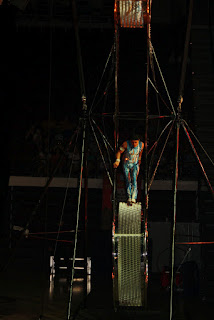 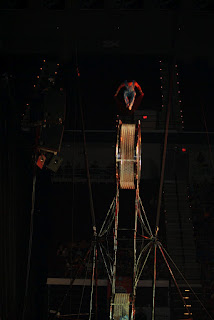 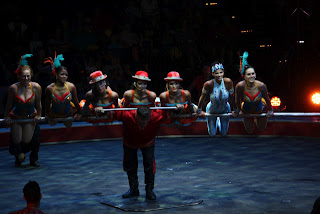 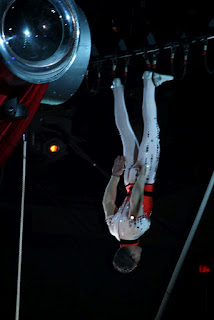 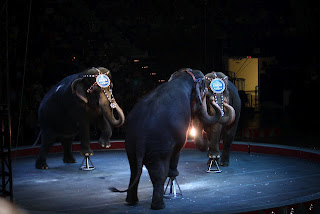 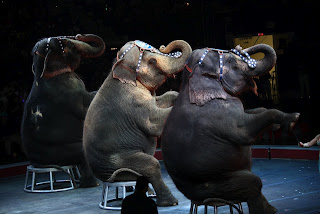 The circus was such a collectively enjoyable and affordable experience for our family that we actually considered going a second time later in the weekend. Though the swimming pool won out as our Sunday afternoon activity, we'll definitely be in the arena the next time the circus comes to town!
Posted by Chasing Roots at 6:00 AM