In honor of tomorrow's MLB All Star Game (we're cheering for the American League, and Prince Fielder, Justin Verlander,and Miguel Cabrera of the Detroit Tigers), a little story about how NOT to jinx your favorite baseball players and teams...

I should start off by mentioning that I know you're not supposed to discuss or even refer to a pitcher's no-hitter while it's in progress, as doing so is apparently the best possible way to bring about the streak's end. I don't recall ever actually learning this "rule", though I somehow knew to follow it while Tom and I watched Justin Verlander (of the Detroit Tigers) pitch his very first no-hitter on June 12th, 2007.

Starting in about the seventh inning and after every pitch, Tom would glance over at me with a nervous look on his face. I could tell he wasn't sure whether or not I knew the rule, and because asking me about the rule would mean discussing the no-hitter, he was left with no other option than to cross his fingers and hope my daddy'd taught me well.

When Verlander's no-hitter was complete, we - like everyone in the crowd - cheered (quietly, of course, as eight-month-old Will was sleeping in the next room), jumped up and down on the bed, and high-fived like complete idiots. When our celebrating finally died down, Tom confessed to me how nervous he'd been throughout the last few innings, both because of the scope and infrequency of the athletic accomplishment we were witnessing, but also because he had no idea if I knew to keep my mouth shut. I'm not sure he's ever been prouder of me than he was when I told him I knew the rule.

Fast forward a few years, to this spring. Our neighbors are huge Aggie baseball fans (they have eight stadium seats from the old Olsen Field in the backyard, and I sat in them last week - it was very exciting for me) - we're talking season tickets, great seats, and a fabulous front-and-center parking spot. As we pulled into our driveway late one Sunday morning, our neighbor walked across the street and offered me their four tickets and parking pass. I was kind of speechless, to the point that he probably thought I'd lost my mind, but eventually I thanked him, took the tickets, and piled Sara, Jeff (my sister and brother-in-law), and Will in the car and drove to the ballpark.

It was a perfect day: the weather was gorgeous, our seats were fantastic, and the Aggies' bats were hot. Will did remarkably well throughout the first seven innings, at which point I took him to the playground to  let him run off a little steam.  We returned to our seats at the top of the ninth; the Aggies were up 6-1 and I figured the our closer would bring about three quick outs to end the game. 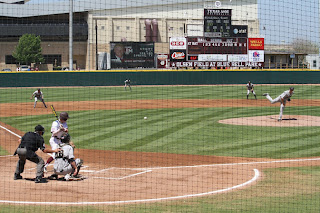 I told Will as much, explaining that when the home team - which bats last - is winning after the top of the ninth, the game is over.  I pointed to the scoreboard, and assured him we'd be heading to the car in a couple of minutes.

As soon as it came out of my mouth I knew I'd screwed up.  My brother-in-law shot daggers at me with his eyes.  My sister slapped my knee, and let out an exasperated, "Eeerrrrinnnn".  And just like that, my jinx lit those Missouri bats on fire. 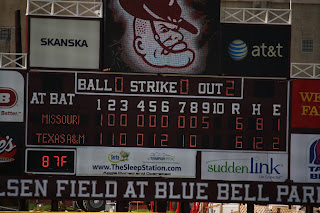 I shrunk lower and lower into my seat as each of five Missouri batters crossed home plate.  Will asked me what I was doing, and since I'd already jinxed the Aggies I went ahead and explained the rule to him so that someday he won't make the same mistake I did.

THANKFULLY, the Aggies scored a run in the bottom of the ninth to win the game.  The sigh of relief that escaped my lips when the players stormed the field was so loud it could nearly be heard over the roar of the crowd. 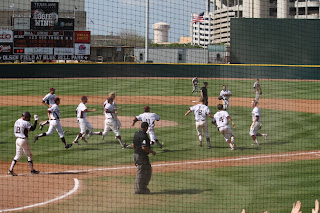 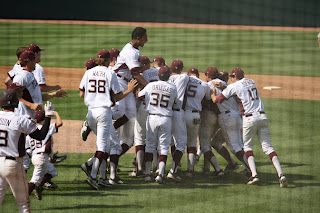 So I'm sorry, Aggies and Aggie fans, for the unnecessary stress I placed on you that spring day.  I promise, it WON'T happen again.
Posted by Chasing Roots at 6:00 AM