Last September I began writing weekly posts for the National American Red Cross blog, and last March I entered into a contract with MomsEveryday to allow them access to my Midwestern Girl blog posts and to write monthly posts for their parenting/family website. I have greatly enjoyed writing for these two popular and well-respected sites, and I love sharing my work with you by way of links posted on this blog.

I want and plan to continue sharing links to these posts on Midwestern Girl, but starting today I'm going to do so in a slightly different way than I've done in the past (one blog post for each new link).

My Friday posts will now be called Weekly Wrap-Ups, and will include blurbs about and links to my Red Cross and MomsEveryday work. I also plan to include fun quotations, links to interesting blog posts and articles, links to entertaining YouTube videos, and photos that don't necessarily come with enough of a story around which to build a blog post.

So, without further adieu, welcome to my first Weekly Wrap-Up!

Cowhide
Only in Texas will you find benches covered in cowhide decorating the interior of a university's Memorial Student Center. Will stroked this bench like it was his pet cat for close to five minutes, at which point he asked and I told him what he was running his hands across.  When he realized he was petting a cow that wasn't a cow anymore, the petting ceased and he asked for a wet wipe. 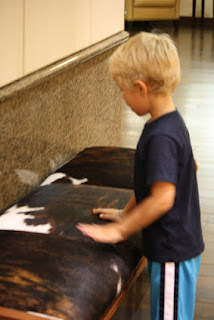 Boy Bands Are Back
Unlike the cool kids, I was never a fan of the boy bands that dominated 80's and 90's pop music. I learned the lyrics to a few New Kids on the Block, Backstreet Boys, 'N Sync, and 98 Degrees songs, but only because they were played once an hour on the radio station preferred by nearly all of my friends. (I secretly listened to country and oldies radio stations.) 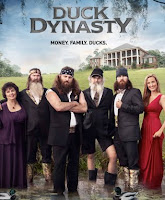 Duck Dynasty
Have you watched Duck Dynasty on A&E yet?
"Ask anyone in Louisiana and they'll tell you that the bayou state's favorite first family doesn't live in the governor's mansion but in the backwoods, where the Robertsons' rags-to-riches story is still unfolding. A homegrown mom-and-pop operation, Duck Commander has become a sporting empire by fabricating top-of-the-line duck calls and decoys out of salvaged swamp wood."

I promise that you'll never regret giving this wildly entertaining, completely ridiculous, and oddly heart-warming show a chance - it is without a doubt the best reality show on television.

MomsEveryday
Click here to read (or reread, if you read it here first) Water, Water Everywhere, which has much more to do with how our family is staying cool in this spring/spring heat that it does with Hallie flooding our bathroom.