At the University of Wisconsin, the University of Iowa, and the University of Michigan (all schools I've attended or at which I've spent many hours of my time), this building is simply called "The Union". Now that I think about it, quite a few major events in my life have taken place in The Unions at these universities; for example, my prom was held at the UW Union, and Tom and I held our wedding reception at the UI Union. Good times...

The student union at Texas A&M University is slightly different from those at other universities. The TAMU Memorial Student Center (abbreviated to MSC, NOT "The Union"), commonly referred to as "The Living Room of Texas A&M", has been considered a living memorial since it's dedication on Muster Day in 1951. Originally the MSC was dedicated to the Aggies who gave their lives during the first two World Wars, but later the building was rededicated to all "Aggies who have given or will give their lives in wartime". Because the building and surrounding grounds are considered a memorial, those entering the MSC are asked to remove their hats and not walk on the grass.

In 2009 the MSC closed for renovations. I remember being disappointed when I learned we wouldn't be able to walk through the building when we visited College Station and TAMU for the first time.  In my experience, the pulse of a university can most easily taken by 1) wandering through campus, 2) visiting the football stadium, and 3) meandering through the student union; without the student union as a reference point (and with our walk through campus soured by the sweltering heat and the fire ants in which I sat), I didn't feel like I really understood TAMU the way I'd wanted to before we had to make a decision about whether or not we wanted to move here.

Less than two months ago - on Muster Day - the renovated MSC opened once again.  We didn't attend the grand rededication (though I was tempted, as I really wanted to see the building and am quite curious about Muster) but visited the MSC on Mothers Day.  You know, on the one day of the year when everyone in the family agrees to go where I want to go and do what I want to do.

The building is beautifully built and decorated, in a way that peacefully marries TAMU tradition and history with modern conveniences that will support forward progress and the needs of students in the years to come. We wandered the nearly empty halls for close to an hour, popping into art galleries, reading dedications, and pausing to pay our respects to those this living memorial honors. 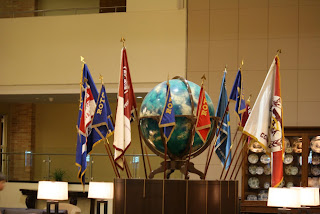 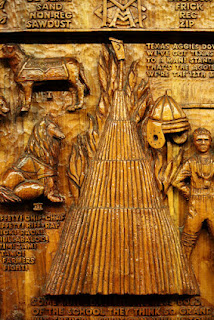 At the end of every day, usually over dinner, I ask Will and Hallie about the best and worst parts of their days.  During dinner after we toured the MSC, the kids agreed that the fountain in the MSC courtyard was the highlight of their day. 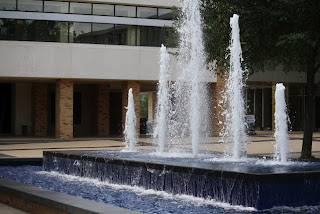 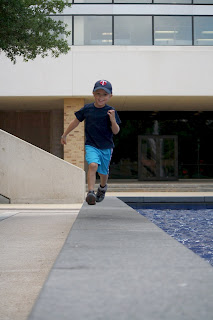 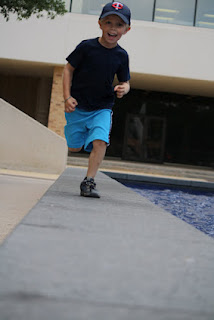 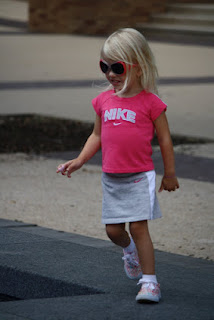 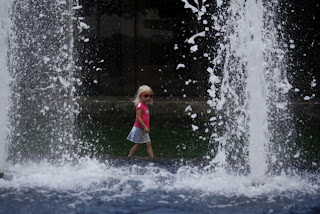 After they share their "bests" and "worsts" with me, Will and Hallie usually ask me about my day.  On that day - Mothers Day - my highlight wasn't my gifts, or breakfast at the Hullabaloo Diner (which was amazing, however), or taking the afternoon "off" to write in a coffee shop.  My highlight was a brief but powerful discussion we had upon entering the MSC.

We were lucky that Will was wearing a hat that day.

As we entered the MSC we saw these words engraved on the glass entrance. 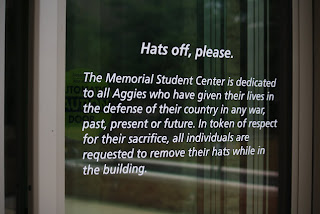 Had Will's little blond head been bare, we'd have cruised right through the automatic doors without giving the words so much as a second glance. But because of his hat, we paused, read the request, and then discussed it's meaning and the reason behind it with a little boy who, if being a University of Iowa Hawkeye doesn't work out, wants to "stay in Texas for the rest of his life and be an Aggie".

Hats off to you, Aggies.  You never fail to show your class.
Posted by Chasing Roots at 6:00 AM