Those of you familiar with Hallie's current relationship with the toilet (she likes to cram stuff into the toilet and the toilet likes to overflow in response) may have read the title of this post and assumed it to be about the many recent bathroom floodings we've experienced. You'll be relieved to learn, then, that this post has nothing to do with the water in my toilets and is instead all about the massive amounts of water coming out of my hose.

The water fights I had with friends, my sister, and my dad when I was growing up in Wisconsin were pretty awful. There was never a time when the temperature of the air outside was so hot that the water temperature as it came out of the hose was anything shockingly and miserably cold. In July and August the water didn't sting as badly, especially once we were completely wet and running around, working up a sweat, but it was NEVER comfortable or refreshing.

You see, in Wisconsin (and many other northern states that battle below-freezing temperatures for a significant portion of the year), water pipes must be buried below the frost line to prevent them from freezing during the long, cold winter months. This means the water in the pipes, while not frozen, never runs close enough to the surface for the sun to increase its temperature to anything above what feels like a frigid 33 degrees. It doesn't matter how hot it is outside, 33 degree water is damn cold.

In Texas, the ground doesn't freeze, which means water pipes can be buried much closer to the surface. The hot sun warms bakes the ground and warms the pipes, which in turn warm the water. When I turn on our hose now, the water spraying from the spout feels like bath water, and not just at first - the bath water keeps on coming for hours on end.

We made this discovery last month, when Will was gifted two squirt guns for his half-birthday. He filled them up from the hose and then handed one to his daddy, who promptly squirted him in the face. I cringed, expecting the cold water to elicit an immediate meltdown from Will, but instead he just smiled and then laughed out loud. "It's so warm!" he cried, clearly thrilled with this new discovery. The water fight went on and on, until Will was drenched, Tom was drenched, and finally Grandpa Mike was drenched. 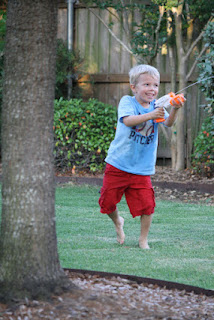 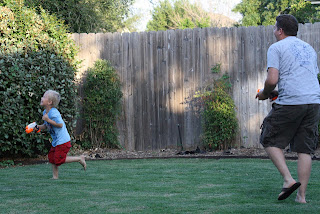 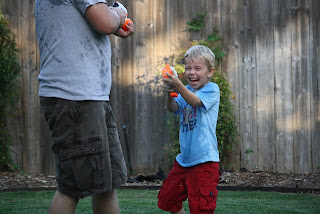 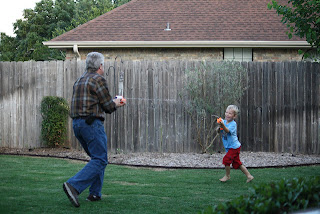 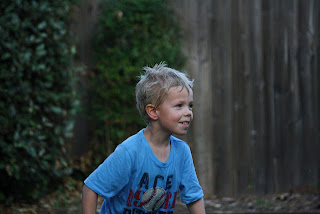 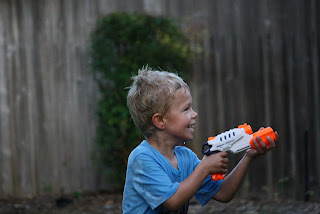 The smile on that boy's face during his water fight made my heart sing.

A couple of weeks later, on a Sunday night when the May temperatures had climbed into the 90s and I had exhausted all of my ideas to keep the kids entertained and from killing each other, I packed Will and Hallie into the hot, hot car and drove to Wal-Mart. We found a lizard sprinkler on sale for $5.99 and brought it home with us, hoping it would solve some of our summer heat problems. (Unlike many Texas residents, we don't have a swimming pool in our backyard. I take full responsibility for this unfortunate state of affairs, as I really didn't want to deal with the safety issues associated with home swimming pools.  But now that summer has once again arrived I've been rethinking my decision to purchase a pool-less house...)

The lizard actually turned out to be really cool, and Will took to it right away. In his underwear. 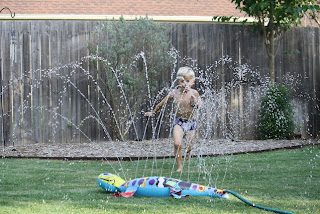 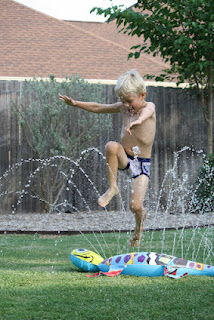 Hallie, on the other hand, couldn't stay far enough away from the sprinkler. For close to 30 minutes she sat by herself on the patio - in her swimsuit - watching Will play.

But eventually, when she thought I wasn't looking, Hallie began creeping toward the sprinkler. 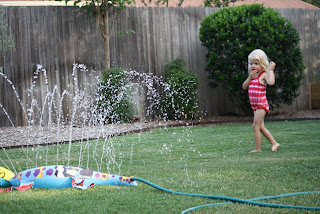 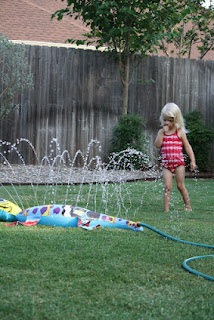 Eventually she put her hand in the stream of water... 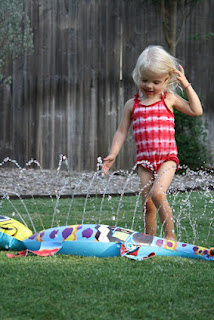 ...and then 15 minutes later she finally worked up the courage to run through the sprinkler. 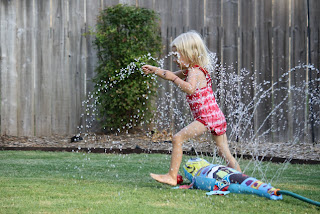 She continued to run through the water and jump over the lizard for the next half hour.  After each jump she'd run a full circle through the yard yelling "CHEETAH POWER!" or "FALCON POWER!", courtesy of Wild Kratts. 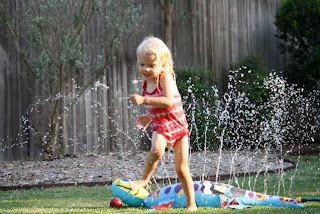 After watching the kids play in the sprinkler for close to an hour, I realized that there was absolutely no reason why I shouldn't run through the sprinkler as well.  My coolness factor increased 10-fold that day, at least by Will's standards. 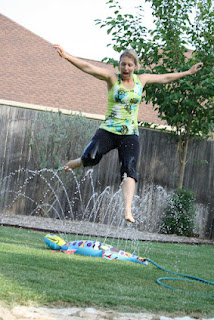 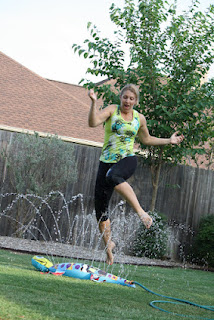 I've found a new love for sprinklers, down here where bath water comes out of the hose.  Friends - of all ages - feel free to come on over and run through our lizard sprinkler whenever you'd like!
Posted by Chasing Roots at 6:00 AM