A trip to my in-laws house in Lincoln, Nebraska feels to me much the same as going home to Madison, Wisconsin does. There are quite a few differences between the cities of course, but I've known my in-laws and have visited them in their home for the last 13 years, and both they and the house are a comfort to me in the same way my parents and their house are a comfort to me.

Now, after 18 or so years in their current home, my in-laws are moving. A couple of weeks ago we drove to Lincoln for both a wedding and one last hurrah in the old house with Tom's younger brothers and sister.

My in-laws bought a house in Lincoln and have plans to renovate, but after learning how much work and money it would take to turn the house into exactly what they wanted, they decided to tear it down and build a new house - in a style and size appropriate to the neighborhood - in its place. Their rebuild won't be finished until early next year, however, so in the interim, they're living on a friend's farm just outside of Lincoln. While we were in town, we visited the farm, mostly to transport a load of my in-laws belongings but also so that Hallie could feed Venus the horse. 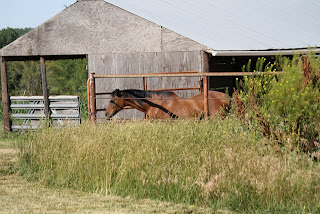 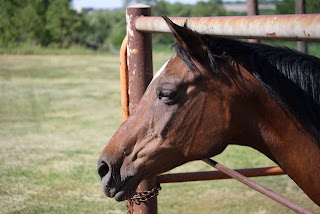 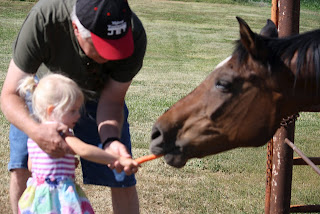 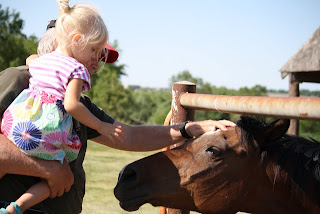 I'm not a big-city girl or a small-town girl, and I'm definitely not a farm girl (I'm more of a moderately-sized-college-town girl), but I really enjoyed myself that afternoon on the farm. Perhaps because I didn't have to tend to the crops or shovel manure. 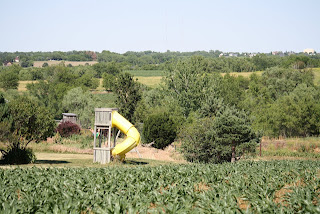 The kids had a great time as well; after feeding the horse they tried out the swing set and rode on the riding lawn mower with Grandpa Mike. 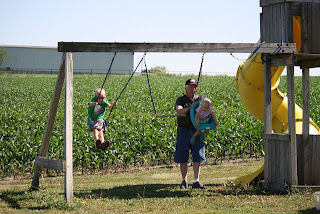 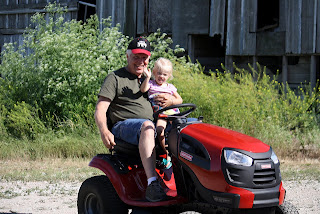 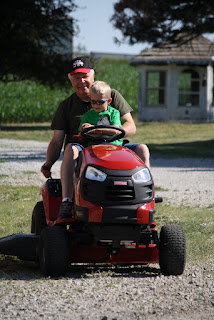 On our way home, we drove up to the top of a hill at the edge of the property to check out the view. When we arrived at the peak, Hallie requested a "pretty flower" and Grandpa hopped out of the truck to pick one for her. Grandpa moved out of Will's field of view while searching for just the right flower, and for some reason that made Will freak out - he's started whimpering that we were lost and would never be able to find our way back home and would have to live in the country forever. I assured him we weren't at all lost, and that he wouldn't have to live in the country forever...seeing as, you know, I could see Super Target out my window. 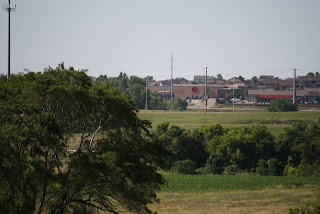 I guess Will's not much of a farm boy either.
Posted by Chasing Roots at 6:00 AM