May 15 - June 15 is recognized as Tourette Association Awareness Month. (Yes, it's weird that this month of awareness is half of May and half of June instead of just one complete month.) Throughout these 31 days we aim to increase awareness about Tourette syndrome (TS) while advocating for those suffering from this disorder.

For those of you who are new here or who may have missed the posts in which I've touched on this information, Hallie has TS. We started seeing tics around her seventh birthday, and she was officially diagnosed the summer before second grade. I wrote a little about that time in her and our lives here on Chasing Roots, in her eight-year-old birthday post.

TS is constantly changing, which means some hours, days, weeks, months, and even years are good...and some aren't. Hallie tries her best not to complain (my mom told me the other day that in six years she's only ever heard Hallie complain ONCE), in part because she knows she's one of the "lucky" ones, but there are days when the weight of TS becomes too much.

What does it mean to be "lucky", when it comes to TS? For us, it means that 1) Hallie has never had any vocal tics, which draw more attention - usually - than motor tics. I know that as much as she hates her motor tics, Hallie is glad she doesn't have vocal tics. 2) Hallie has learned how to use dance as a coping mechanism - or even "treatment" - of sorts. Moving her body so intentionally quiets her tics and helps her feel in control, at least for short periods of time, of what her arms and legs and hips and shoulders are doing. 3) Hallie has wonderful friends who love and support her no matter what.

Most people don't know much about TS, and many people have an inaccurate understanding of TS. So here are a few facts to set the record straight:

For most people with TS, tics tend to increase during times of excitement, stress, or anxiety, and decrease during times of calm or focus. Talking about or drawing attention to tics only makes them worse, as does asking someone to stop or suppress their tics. In fact, suppressing tics can lead to uncomfortable and even painfully severe rebounds of tics along with additional issues like migraines, anxiety, and depression.
So, how can you support someone living with TS?
Ultimately, awareness, understanding, and kindness are the greatest tools we have to help people with TS live productive, successful, and happy lives.
Speaking of...my girl is productive, successful, and happy. (Well, most of the time. She is a 13-year-old girl, so she has 13-year-old girl "moments" just like the rest of us had, have, and/or will have.) She has the tenderest of hearts and is an ally for all, likely because she herself has been treated unkindly and understands how horrible it feels to be laughed at for something she cannot control. She has fragile moments, but is otherwise made of steel - exceptionally tough and resilient. We talk regularly about how "everyone has something", meaning that everyone is fighting a battle we know nothing about. Some people, like her brother, cousins, and sweet friend, Morgan, have dealt with life-threatening food allergies. Others, including multiple friends of hers, have dealt with anxiety and OCD. Others still have conditions like dyslexia, ADHD, or autism or diseases like diabetes and cancer. For Hallie, knowing that everyone has something makes her something an easier pill to swallow and reinforces her mission to go out into the world and make everyone - regardless of their "something" - feel accepted and supported and loved. 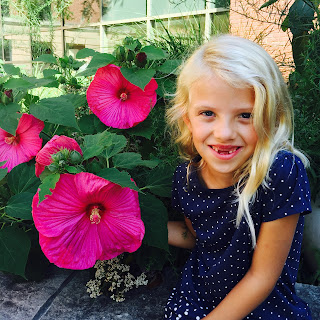 I always think of this picture as her "Tourette syndrome" picture. It was taken before we received her official diagnosis but after we had accepted what was coming, so it feels very transitional to me. Both before Tourette's and after Tourette's, when the world felt very dark but there were glimmers of her light shining through.
Questions? Ask us!
Posted by Chasing Roots at 5:00 AM