In Texas We Drive Trucks

Tom and I aren't car people. We never have been, and I suspect we never will be. We have opinions about the colors, features, and passenger capacities of our vehicles, but we don't get excited about nor are we willing to pay for bells and whistles; I'm more of a "does it have room for my kids and their friends? Does it have enough cup holders?" kind of girl, and Tom just wants enough space to transport his disc golf bags and keyboard.

After a few years of living in Texas, however, Tom started to think about (slightly) more than his vehicle's capacity...he started to think that trucks looked kind of cool. Trucks serve a purpose too, of course, especially when it comes to moving large items - like I mentioned, Tom transports his disc golf and music paraphernalia weekly, but we take quite a bit with us to summer soccer games (think tent, lawn chairs, coolers, etc.) and make a lot of trips to Lowe's as well. So we made eventual plans to gift Tom's car to Will for his 16th birthday and then purchase a truck for Tom.

Well, our timeline sped up a bit when a few weeks ago someone rear-ended Tom while in Austin for a concert. He was traveling on the interstate when the traffic in his lane came to a complete stop, and while he was able to stop, the car behind him was not...and that car slammed into Tom and pushed Tom's car into the car in front of him as well. Thankfully, NONE of the people in any of the cars were hurt at all. But Tom's car was totaled as a result of the two collisions.

So now Tom - Texas Tom, as we should probably start calling him - is the proud owner of a new (to us) truck and has become a card-carrying member of the "In Texas We Drive Trucks" club.

Anyone know where the club meetings are held? He'd like to attend. 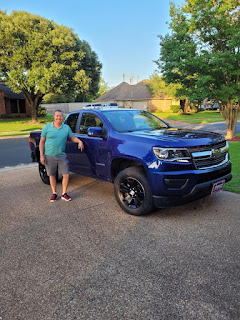 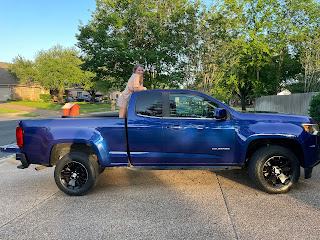