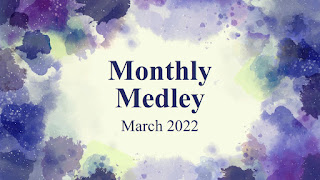 I'm a little late on the March Monthly Medley, but as I always say, better late than never!

The library is killing me with their three week check out windows, y'all. I know I've mentioned this before, but where I grew up we could check out books for four weeks and that always seemed like the perfect amount of time. Three weeks is somehow never quite enough for me, so I always have either overdue books or books that I have to turn in before I've finished them. (Hallie is in the same boat, as she regularly checks out books and uses them for school projects...and then the books are due before the projects are due.)

Enough complaining...on to the books - yep, books PLURAL - I actually finished this month.

First, I read Goodnight Beautiful by Aimee Molloy. I admit to being slightly confused in the beginning, as I didn't catch that the story was being told from multiple perspectives, but once I got that straightened out in my brain I enjoyed this thriller. Second, I read - because it came across my radar and I realized I'd never read it as a teenager - The Giver by Lois Lowry. I loved this story, but the ending...oh, I HATED the ending. I won't give it away completely in case you haven't read the book and would like to do so, but (slight spoiler alert) the ending provided almost no closure which is what I want and need out of every book. I don't want to imagine what might have happened next...I want to KNOW. And, I want all of the loose ends tied up neatly in a bow. Should I read the next book she wrote (Gathering Blue), or will I feel the same when when I finish that one? 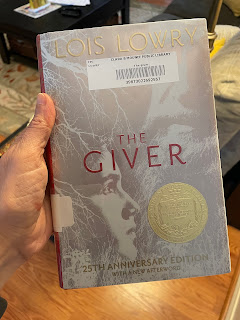 On a night when Hallie was gone (because it was rated R) and the boys were watching disc golf or The Simpsons or a Marvel movie, I watched Brittany Runs a Marathon all by myself. I've seen Jillian Bell in a couple of other movies and I really liked her, so I thought I'd give this comedy a try. It played out differently than I expected - I didn't find Brittany particularly likable in the beginning, and the storyline took a couple of mildly dramatic and slightly darker turns than I was expecting, but I enjoyed how it all came together in the end.

Also on my own I've started watching The Endgame on NBC. I've loved Morena Baccarin since she starred in the remake of V years ago, and she's excellent in this cleverly twisty and excitingly suspenseful heist drama.

Hallie and I - because we have nothing to watch post-Friends - started both Saved by the Bell and The Haunted Hathaways. Neither are great. Any suggestions for us, knowing that we love Friends and that Hallie is at that really hard age for televisions shows? (She's too old for "kid" comedies and dramas, but not quite ready for the fully adult comedies and dramas...)

This month I caught up with The MLK Tapes, listened to Gangsta Capitalism's second season 3 Bonus episode, and downloaded a couple of new podcasts to try in April - March was kind of a "catch up" month for me! 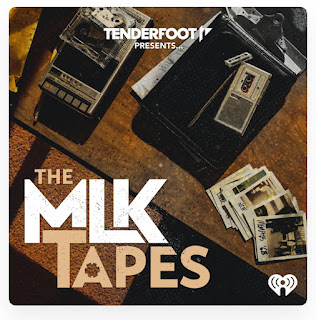 I actually found quite a few new people to follow on Instagram this month, so I'll share two now, and hang on to the other two for next month in case I don't find anyone new in April. First, Shannon Payton (@officialshannypants) - she's best known for her reels in which she comedically mimics what other influencers are doing (packing perfect Bento lunch boxes, pulling together the perfect outfit) in their reels. She's hilarious, but also honest and real and I feel like we could be friends if our paths ever crossed. Second, V Spehar (@underthedesknews) - they share short reels about national and worldwide events, but does so in a way that is easy to understand and doesn't make me feel like the everything is crashing and burning around me (even when it is)...and they do it all from underneath a classroom desk.

In my last Alltrue box (was previously called Causebox), I received a face exfoliater from Symbiosis London. After using it almost every day (at first I was using it every day, but now I've switched to every other day to conserve what I have left) I can confirm that it is without a doubt the best and my favorite exfoliator of all time. It's called Ultra Fine Balancing Sorbet Facial Cryo-Exfoliator with Hyaluronic Acic + Papaya Glycolic Extract, and sadly, it's crazy expensive. So while I probably won't ever be able to buy it outside of this once through my Alltrue membership, I wanted to share it in case anyone was looking for this kind of product and has a facial products budget that's higher than mine.

I didn't post about my Roomba right off the bat, as I wanted to make sure I really liked it...and now, after using it for about two months, I can confirm that I DO really like it her (we named her Reba the Roomba, and also after Reba McIntire). She's not quite as smart as I want her to be, but she's pretty darn smart. And she doesn't do quite as good of a job as I do, but she does a pretty darn good job. As long as she doesn't get stuck, run out of battery (because she got stuck or confused and then couldn't find her way back home), or get clogged while working, it's VERY nice to just send her out and then come home to clean floors!

I'm bowing out of this category this month. Rather than shopping for shoes, clothes, or jewelry, I've been doing my quarterly clean/clear out in preparation for the upcoming change in seasons. Hoping we actually get a little bit of spring weather before summer takes over!

I made my frosting up as a I went along, but it basically included 16 ounces of unsalted butter, 8 ounces of cream cheese, three cups of powdered sugar, and 1/4 cup strawberry puree that I had reduced by about half.

This bicyclist who saved a kitten while on a ride.

Hope you had a great March!

Does anyone know - is there a way for me to save videos to my computer videos I've already saved on Instagram so I can share them here? I can't figure this out...