This post is a little outside the realm of what I usually write, but as the topic has come up in conversation multiple times lately, I thought there might be some parents out there who would benefit from and appreciate reading about how Will went from an asthmatic preschooler to a soccer midfielder and distance runner.
Will's pediatrician suspected he had asthma starting around the time he turned two. He had moderate eczema as a baby - and it lingered in isolated areas until he started kindergarten - and had by the toddler years already been diagnosed with multiple food allergies. His pediatrician explained that allergies, eczema, and asthma are a commonly diagnosed trifecta, meaning that if a child is diagnosed with one, they're more likely to be diagnosed with a second...and if they're diagnosed with two, they will almost certainly be diagnosed with the third. Diagnosing asthma requires the child to be old enough to explain what's going on in their body, however, so most kids aren't labeled as asthmatics until they're around four years old. And sure enough, when Will was four, he received his official asthma diagnosis.
When Will was diagnosed, we heard - and I read extensively - about two completely opposite opinions on how to care for asthmatics: 1) Protect their lungs by keeping them from overexerting themselves, OR 2) improve their lungs by encouraging them to be as physically active as possible. I chose the latter option, as it seemed like the best route for raising a strong, healthy child, but also because I can still remember feeling annoyed when, as an elementary schooler myself, the kids with asthma got to sit out of PE and running activities - which I couldn't stand - whenever they wanted to do so. (That makes me sound terrible, I know. Just being honest about my thought process.)
I read that the optimal activities for kids with asthma were swimming and sports that involved running, as both swimming and running require learning to control breathing, so that's where we started. At the time, Will HATED swimming. The water was too cold, the water was too warm. His swim trunks were too tight, his swim trunks were too loose. His goggles leaked, his goggles didn't stay on his head. The sky was blue, the sky was cloudy. You get the picture. We kept working on swimming simply because he needed to learn how to swim, but I stopped focusing on swimming as Will's asthmatic remedy and switched gears to running. Will started playing soccer, which went about as well as swimming, at least at first; it took Grandpa Paul coming to a practice to get Will over the hump (thanks, Grandpa - we owe you one). We also started encouraging Will to run whenever we were outside. Running the last 100 feet to the playground or the last block before our house, then racing us to these destinations, and eventually racing us for longer distances - thank goodness he's naturally competitive - were a great progression to get him excited about moving.

Through all this, Will would occasionally use his inhaler. For him, cold weather and illness were the biggest contributing factors, but allergens in the air and things like freshly cut grass could also create problems.
By the time Will started kindergarten, he was a decent runner for his age. He LOVED running in PE, and worked incredibly hard on those days. It wasn't until mid-February - when the kids ran on a particularly chilly day - that Will had to ask his PE teacher if he could make a quick trip down to the nurse's office for a puff of his inhaler. The PE teacher told me a few days later that she was shocked Will had asthma (apparently that information hadn't been communicated to her by another adult, and Will never told her) because he ran so well and hadn't, prior to that day, ever needed to use his inhaler. I related to her my research and opinions on strengthening vs. protecting, and I honestly thought she was going to cry, she was so happy. She explained that she'd felt that way for years, but that for most kids, by the time they made it to her as kindergarteners, had already been taught that they shouldn't work their lungs to that extent and therefore asked - and expected to be allowed - to sit out of intense physical activities.
To be clear: I know there are kids with asthma much more severe than Will's. I know there kids for whom the risks, treatment plans, maintenance plans, medications, etc. differ. I am not a doctor (though I'd like to play one on TV)...I'm simply a mom who worked really hard to help her kiddo work through some tough stuff and is hoping that work might help another mom who's going through something similar a decade later.
Fast forward 10ish years, and Will can sprint - at least what I would consider sprinting - for miles and play a full competitive soccer game in the midfield, a running-heavy position. He doesn't worry about whether or not his lungs will hold up, because he knows from experience that they will. Yes, he still on occasion uses his inhaler, but there are usually extenuating circumstances (illness, allergies, and/or extreme cold) and the "recovery" window is short. I've made A LOT of parenting mistakes and missteps, but I feel strongly that in this instance we made the right call. 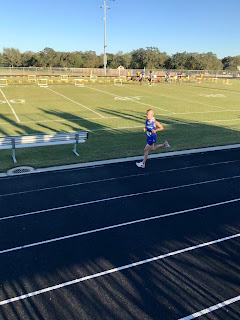 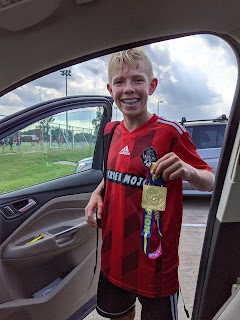 As I wrote at the beginning of this post, I share all this because I know there are mamas (and daddies) out there who are struggling with asthma diagnoses, struggling to help kiddos live their lives with asthma, and/or just struggling in general. Maybe our experience will encourage a new way of thinking, help guide a conversation with a doctor, or at the very least, offer a bit of hope.
Want to talk more about asthma? Feel free to email me at erinlferris@yahoo.com!

Again, I'm not a doctor. Talk to someone who actually is about how to best treat a child with asthma.
Posted by Chasing Roots at 5:00 AM