Writing
As I mentioned in last month's medley, I didn't have any writing goals for August. I wanted to spend all of my free time with the kids before they headed back to school, and that I did. I cranked out a short, quick article and a couple of pitches last week, but that was about it. Now that September has begun, I plan to brainstorm pitches, draft and submit a few of these pitches, plan out the next couple of months on Chasing Roots, and research new opportunities.

Reading
Rather than finish one book in August, I started - and made it about halfway through - three books. Two of these books are fiction novels that I don't feel qualified to review until I've read through to the final page, but the other book is a collection of nonfiction short stories that I can confidently recommend despite not yet finishing every last word. Women Heroes of World War II: The Pacific Theater by Kathryn J. Atwood includes 15 stories of "resistance, rescue, sabotage, and survival", each of which is more captivating that the last. 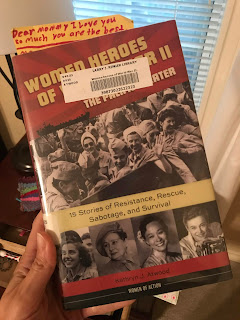 In the world of youth fiction, Hallie has fallen for the original Babysitter's Club books. They're almost impossible to get (at least in order) from the library, so I have been purchasing them a couple at a time from Amazon; doing so is a pricey way to build her Babysitter's Club library, but she likes them enough that I don't mind the extra cost. If you ever want to borrow these "classics" for a young reader in your life, let me know!

Watching
I had high hopes of seeing Toy Story 4, Yesterday, and Dora and the Lost City of Gold in the theater before the kids headed back to school, but in the end, just Will and I made it to Spiderman: Far From Home. We both really enjoyed the movie though, me much more so than I expected.

We didn't watch much on the small screen this month (though next month will be a different story - I can't wait for all of the season and series premieres that air in September), but I did introduce Hallie to Miss Congeniality, which she loved. She and I - and every single one of her friends - also enjoyed Descendants 3 on the Disney Channel.

Listening To
I just finished Season two of Breakdown, the podcast I first mentioned last month. While the podcast deals with dark topics and difficult outcomes - it is appropriately called Breakdown, as it addresses often frustrating breakdowns in our courts - I like learning about how our justice system works, outside of watching Law & Order episodes.

For those of you wondering about the weight of the podcasts I usually recommend, know that I balance all of my true crime listening with lighter podcasts like Young House Love Has a Podcast and This is Love, both of which I highly recommend!

Wearing
I know summer has nearly come to an end for most of the country (LUCKY) so this post might be a day late and a dollar short, but I discovered a tankini top from Athleta that I absolutely love. The style is flattering, the pattern is pretty, and the suit itself keeps everything tucked in and where it's supposed to stay, which makes it a great option for actually playing in the water with your kids. It's called a high neck tankini, and while the "midnight palm" pattern I chose is nearly sold out, Athleta still has quite a few sizes in a variety of solid colors. (And I expect they'll go on sale within a few weeks.)

Trying/Using
We gave Will a basic smart phone - locked down as best we could while still granting access to calling and texting - when he started fifth grade. He walked almost a mile to and from school, so I wanted him to be able to contact me if he had problems on the walk (which happened, more than once), as well as when he arrived at school. Throughout both fifth and sixth grade, Will used the phone to communicate with us, take photos, listen to music, and occasionally watch YouTube chess and soccer videos, and handled the responsibility of a phone as well as I would have expected: for the most part he took good care of it and used it for what we had approved, but every once in a while he broke our rules by taking it into his room or watching videos when we weren't home to approve them.

Hallie started fifth grade this year, and is also walking to school. She didn't want a phone at all, so I started looking into other options for her...and nothing I found checked all of the boxes on my list. I did (well, my mom did), however, eventually find what I think is the best phone out there for kids: the jitterbug flip. The phone is actually designed for the older generation, with simplicity, ease of use, and safety in mind. It has big buttons, a bright screen, and a strong speaker, both on regular mode and speaker mode. It has a navigate-able menu (neither kid needed a tutorial), camera, phone book, preprogrammed library of commonly-used texts, and a few "brain games". It also comes with a 5Star urgent response button/feature, which allows users to immediately connect with a trained agent who can confirm location with GPS, evaluate the situation, and send help immediately. Perhaps most importantly, it does not have access to the internet - the kids can call and text us and THAT'S IT.

Hallie now loves her phone, and Will likes his just fine. That's right, we took away Will's smart phone and replaced it with a jitterbug flip, and all of our lives are better for it. Will wishes that texting complex messages went a little more quickly, but other than that, NO COMPLAINTS. He can get in touch with me and I can get in touch with him, and he cannot use this device to access the internet or social media. It's a win-win...win-win-win. Will knows we will reevaluate phone type, phone use, social media, etc. every summer, but for the time being we're sticking with the current plan because it works for us.

I wish we would have started with the jitterbug flip for Will, but we didn't know about it back then. But now that we do know about it, and I HIGHLY recommend the jitterbug flip if you're looking for a way to keep in touch with your kiddos but would like to steer clear of smart phones and social media for a little while longer. This is a great way to keep the little in our little boys and girls. (Let me know if you have any questions, friends!) 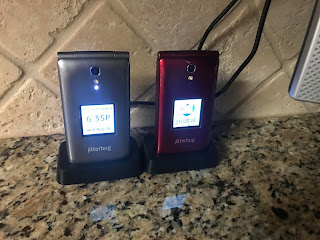 On a completely different note, I bought new rugs to put in front of our front, back, and garage doors. I tried at least five different rugs before I found a style and color I liked and that worked in our house, so I was particularly pleased that these, in addition to coordinating with our home decor and laying flat enough for our doors to swing over them, are holding up so well. And they're reasonably priced!

Eating/Drinking
I would like to once again cook dinner and bake breads, muffins, cakes, cupcakes, and brownies, but IT'S SO HOT outside that I have a hard time justifying turning on my oven. (Speaking of, we replaced both our microwave and oven this month, and I can't wait to learn how to cook with convection heat.) I do have two recipes to share, however, and one cooks in the crockpot, making it perfect for this time of year.