One
My boy comes home from camp today! After I drop Hallie off for her final day of Drama Kids Musical Theatre Camp, I'll drive to Houston, attend the end-of-camp program/ceremony, and then give him a great big hug before we load up and head back to College Station.

As we wrap up Will's third and final year as a Lonestar Leadership Academy camper, I'm grateful for the many incredible experiences he's had at each camp. For example, just this year they visited the San Jacinto Battle Monument, Battleship Texas, the Health Museum, Moody Gardens, the Houston Museum of Natural Science, NASA's Johnson Space Center, the Challenger Learning Center, and the Pearl Fincher Museum of Fine Arts. They also took a marine biology tour in Galveston Bay, the Sam Houston Boat tour, and a private tour of Space Center Houston, and they spent the night in the George Observatory. In addition to all of that, the kids spend quite a bit of time developing their leadership skills and preparing to "participate as informed leaders" in their communities.

For those of you whose children might be interested in this camp, you can find more information here or feel free to send me an email at erinlferris@yahoo.com. The program lasts for three years - year one is held in Dallas/Fort Worth, year two is held in Austin/San Antonio, and year three is held in Houston/Galveston - and students can participate starting the summer after fourth, fifth, or sixth grade.

Two
Tonight, after one week of camp and three weeks of memorizing her lines, Hallie takes the stage as Dorothy in the Drama Kids Musical Theatre Camp's production of Wizard of Oz. I feel like I might vomit from the nerves (though she of course doesn't know that) but I can't wait to see these kids' hard work come alive on stage!

No pics of the performance yet, so here are a few of our Dorothy hair practice session instead.

Three
On a related note, back in January Hallie and I attended a local high school's production of Wizard of Oz. We would have purchased tickets regardless, but I was particularly excited to see the show because the student playing Dorothy was the daughter of a friend. Fast forward a few months... I mentioned Hallie's casting as Dorothy to my friend, and she suggested I contact her daughter - Christina, who played Dorothy - to see if she might be willing to run lines and talk with Hallie as she prepared for her first time on stage. Despite the fact that Christina had never met (other than taking the picture below) either me or Hallie, she was willing and excited, and last Friday afternoon she spent more than an hour talking, laughing, and rehearsing with Hallie. What a gift, for Hallie to have had the opportunity to learn from - and feel noticed by and worthy of attention from - a smart, fun, talented high schooler. 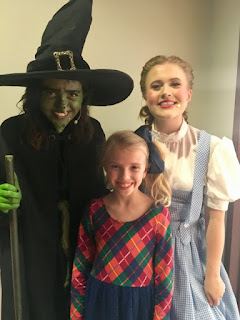 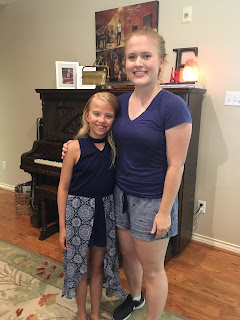 Four
Just when I thought the Mad Scientist Laboratory was finished... Tom came home with four different kinds of insulation from Lowe's and spent all week insulating the walls and roof of his man cave. The addition of the Mad Science Laboratory means Tom works a few steps farther from us (the back corner of the yard compared to the back porch) in the evenings, but watching him gleefully improve and create in his new space makes me happy. 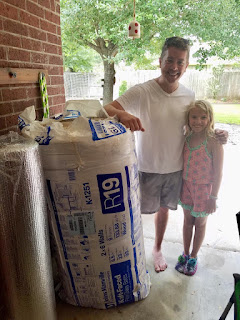 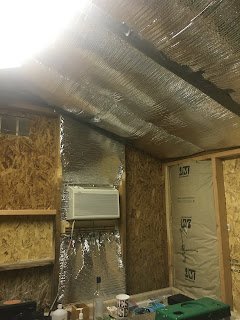